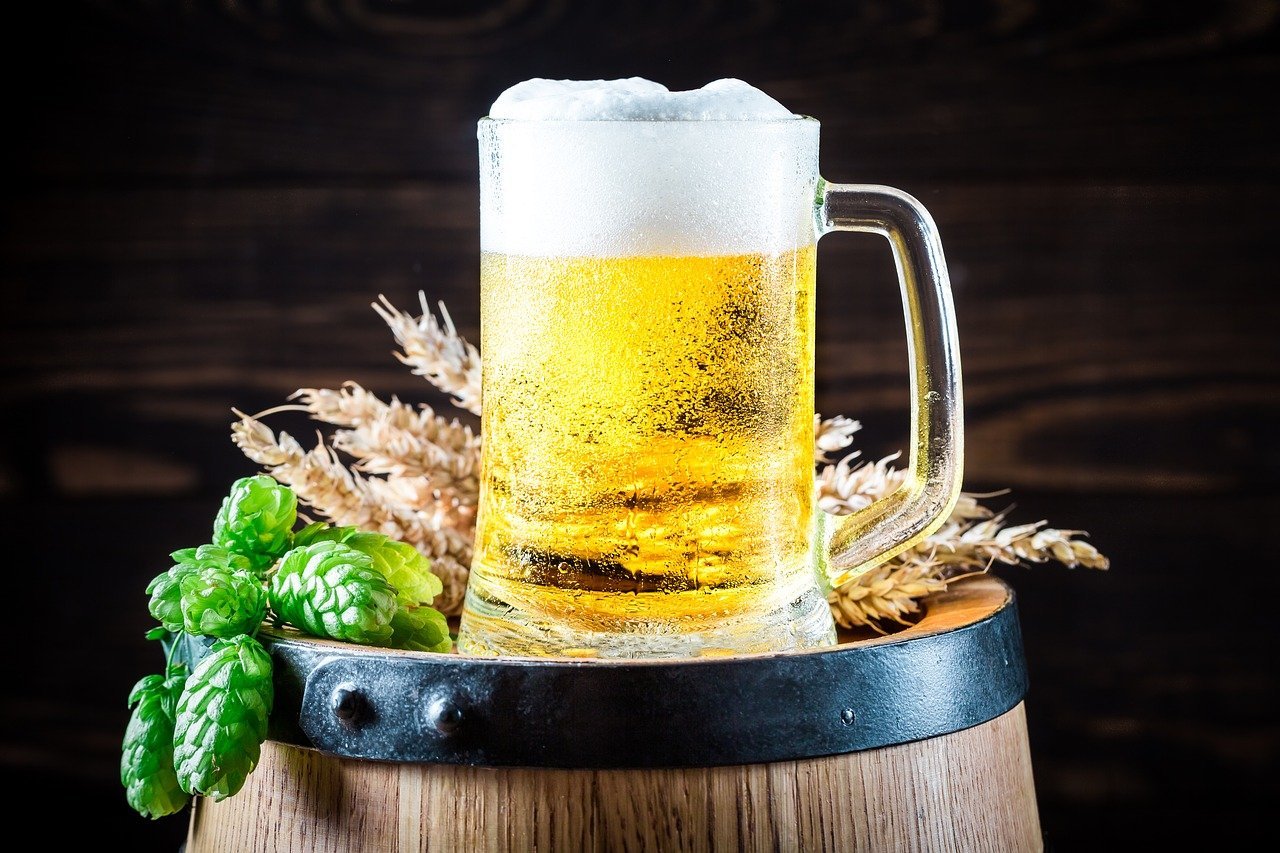 Find out what’s brewing at these top craft beer producers. Keep checking back for new beers.

Just in time for the hot days of summer, this thirst quencher is now available nationwide in the USA. The latest addition to the portfolio of award-winning German wheat beers, this tropical offering is a mix of authentic, unfiltered German hefeweizen beer with 50% pineapple juice. It’s quite refreshing and goes down quite easily, in large part due to its low alcohol content, which just like all beers in the Schöfferhofer family, is only 2.5% ABV. If you like this one, you’ll probably like other variations of Schöfferhofer beers infused with fruit juice, which include Grapefruit, Pomegranate, Passion Fruit and another new release: Wild Cherry.

The Trappist Brasserie de Rochefort has been brewing ales since 1797. In 1920, well before the production of the famous Trappist Rochefort 6, 8 and 10 that have been brewed since the 1950s, the monks brewed an extra-strong blonde beer but discontinued brewing it after a few years. Now, 100 years later, the monks are offering a strong blonde beer inspired by the original recipe. Distinguished by its golden blonde color, notes of citrus and a spicy fragrance, compliments of additions of spices and orange peel, come to the forefront and are joined by rich depth with a hint of honey accents and a body that is fairly light for a beer of this strength. The first new Rochefort beer released since 1955, this Belgian-triple was introduced to Belgians in 2020, and is now available in the U.S.

San Diego’s AleSmith Brewing, founded in 1995, has gained great acclaim over the years for its crowd-pleasing Speedway Stout. It’s a modern-day classic first brewed in 1997 that over the years was ramped up from 8% to its current 12% abv. Today’s version features dominant flavors of chocolate and roasted malts supported by notes of dark fruit, toffee and caramel. In a nod to our neighbors to the south, this new variant includes additions of Mexican dark chocolate, sea salt and Mexican coffee, with the roasty and chocolate flavor profiles continuing, and the salt and coffee merging nicely to rev up the aforementioned flavors. Despite its quite high alcohol content, it delivers a creamy mouthfeel that makes it smooth and surprisingly easy to drink. AleSmith has released more than a dozen variants over the years and this variant marks the brewery’s third of 2021, joining the previous Mostra Coffee & Coconut and Espresso and Madagascar Vanilla variants, and will be followed by a fourth expression later this year.

Deschutes Brewery opened in 1988 and is one of craft beer’s pioneers. Since 2008 the Bend, Oregon-based brewery has been brewing its cherished Flanders-style brown ale Dissident, fermented in oak barrels with cherries, its first and only wild yeast beer, with Brettanomyces added to provide its characteristic sour taste. In recent years, Deschutes has been changing it up with innovative versions using other fruits, with previous versions featuring boysenberries and marionberries. Its latest rendition makes use of Oregon peaches from the Barid Family Orchards and is aged in oak barrels for 11 months. Like the original, it features predominant sour notes, tannins and acidity, along with bright, tart flavors of peaches.

A welcome recent trend is the release of new beers that are low on carbs and calories but not on flavor. Such is the case of this light lager from the number-one-selling Asian beer brand in the United States. Brewed at the brewery location in San Jose, CA, it weighs in at a mere 90 calories, 2.4 carbs and 4% ABV per 12 oz serving. This golden-hued beer is crisp and effervescent, featuring bright floral notes with a subtle hop bitterness. After your first sip awash with flavor you’ll likely want to proclaim that this is not your father’s light beer that dominated the latter part of the 20th century. This premium light beer is packaged in a slim can with minimalist labeling featuring a silver background with the Sapporo logo and PURE in aqua blue lettering.

There’s definitely a beer for everyone and a beer for every occasion. The Bend, Oregon-based 10 Barrel Brewing Company features beers built for the outdoors, and the tagline “Drink Beer Outside” appears on all of its cans and bottles. This easy-drinking Kolsch, brewed using traditional methods and subtle Champagne-like fermentation, goes down easy and is a clean and crisp thirst quencher. As the image of a fisherman on the label implies, it will be a good companion to fishing, or any activity in the great outdoors, or just relaxing indoors after a hard day or vigorous activity. A portion of the proceeds from Reel Good benefit Trout Unlimited’s Home Rivers Initiative, a project by the conservation group focused on protecting and recovering the Gallatin River and its tributaries.

The wildly popular Games of Thrones is matched with the huge popularity of the IPA craft beer style in this new release from the world-renowned Copenhagen-based Mikkeller brewery. Produced at its new brewing facility in San Diego, this hazy IPA marks the 10-year anniversary of the TV series and is the first of a series of Thrones-inspired beers from Mikkeller, with more to come over the next few years. This first release fits in the realm of NEIPA, also known as hazy or juicy IPA, a sub-style known for its unfiltered appearance and significant amounts of fruit-mimicking hops that give it fruity aromas and flavors that are expressive without being as bitter as the aggressive West Coast American IPA style. Dry hopped with the fittingly-named Styrian Dragon hop, predominant flavors include pineapple, mango and peach and a hint of hop bitterness. Mikkeller’s art director Keith Shore designed the label depicting a warrior on bended knee holding a sword aloft with the three-eyed raven perched on it, which just might make the can a collector’s item for diehard fans of the series.

Guinness has long been the gold standard for a world-class stout, which it has brewed at the St. James’s Gate brewery in Dublin since 1759. Its latest innovation makes use of an ingredient never before used by the iconic brewery: coffee! Released just in time for iced coffee season, after pouring you are met with a sweet and distinct rich coffee aroma, and a flavor that is a perfect balance of bitter and sweet with a quite noticeable roast coffee flavor. Brewed using cold brew coffee extract and coffee flavors, it adds a rich, smooth and creamy palate with hints of espresso, chocolate and caramel. Of course, a Guinness stout is best served on nitro, and an ingenious widget in the can infuses nitrogen into the beer upon opening and recreates the signature surge and settle effect you get from a Guinness Draught on tap. An added bonus is that this rich and creamy brew is only 114 calories per 12 oz serving.

The Atlanta-based Monday Night Brewing, launched in 2011, has released Taco Tuesday, and there’s a story behind the names of both the brewery and the beer. The brewery is named for its origins, as back in 2006 its three founders—Jonathan Baker, Joel Iverson and Jeff Heck—chose Monday evenings to homebrew together. As for the beer, this easy-drinking Mexican-style lager can serve well as a pairing for tacos…or burritos…or enchiladas…or yardwork…or sips of tequila. Brewed with Pilsner and Munich malts and hopped with Saphir and Saaz, it serves up a touch of sweetness with a smooth finish and a healthy dose of salinity contributes to a crisp, mouthwatering effect. The brewery is known for its beers’ unusual, memorable names and most of the cans’ artwork feature neckties, harkening back to the days when the brewery’s founders would loosen their ties after arriving from their white collar jobs on Monday evenings to brew each week’s batch of beer, and the special ties for this beer fittingly are emblazoned with whimsical smiling tacos.

Flying Embers has distinguished itself with its healthful hard kombucha and hard seltzers with the taglines “a buzz with benefits” and “a better for you drinking experience.” Now it’s branched out to beer, with this organic brew with a superfood twist, which happens to be an ingredient one would likely never think of being in a beer: reishi mushrooms. This unique ingredient contains adaptogens to help the body adapt to stress combined with the added health properties of prebiotics, live probiotics and botanicals. Other additives include barley, bittersweet cocoa, rolled oats, monk fruit and vanilla, all of which combine for a creamy easy-drinking stout with a balance of bitter and sweet with a dry finish. An added benefit is the caloric level of only 95 calories along with just 2 carbs. There’s also a relatively low alcohol content of 4.5% ABV, which extinguishes the myth that darker beers must be higher in alcohol (as the color of a beer has nothing to do with its alcohol strength).

The San Diego-based Karl Strauss Brewing Company, which was founded in 1989, has joined the ranks of those releasing beers low in calories, carbs and alcohol.

This new release, joining the brewery’s year-round lineup, clocks in at only 4% ABV, 99 calories and 5 carbs, and represents a beer style that is quickly gaining in popularity: Hazy IPA. It’s brewed with Columbus, Idaho 7 and Amarillo hops for juicy citrus aromas and big notes of grapefruit; rolled oats are added for a silky mouthfeel. The unique labeling with a sleek and slender shape is decked out with yellow, orange and green “drops” which brings to mind a psychedelic plasma look harkening back to the ‘60s. Sun Drops Hazy IPA is the brewery’s first release of its new Small But Mighty series, so it appears we can expect more of this quickly growing segment in the future.