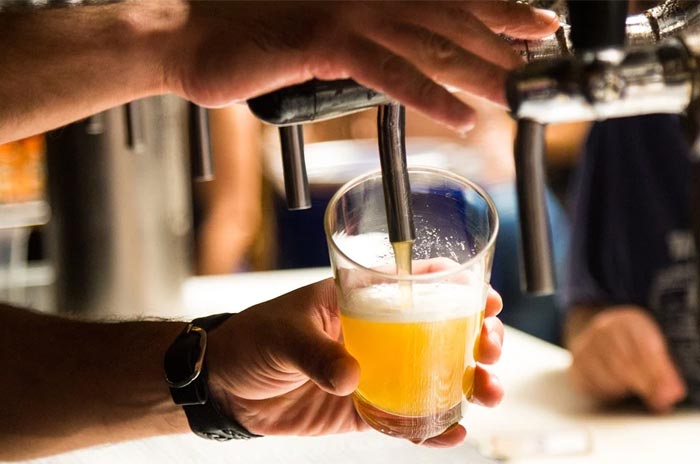 As mentioned last month, at long last beer festivals have returned to Southern Nevada. I had the great fortune to attend the Silver State Brewfest on July 24 at the Tuscany Casino, my first beerfest since February 2020. It was very well run, and proved to be an outstanding opportunity to sample a plethora of Nevada-brewed beers including several unique ones I hadn’t tried before.

Such opportunities will continue with five more on tap in August, September and October. Following is a very brief rundown of each; for more details, scroll down to my July column or visit the websites listed below.

August 28 and October 30: Big Dog’s Brewing will resume its quarterly beerfests at the outdoor area of the Draft House.
Visit www.bigdogsbrews.com.

October 16: The Motley Brews Downtown Brew Festival will return to the Clark County Amphitheater with more than 60 attending breweries and 200-plus craft beers.
Visit downtownbrewfestival.com.

There’s no question Weston Barkley has won over the local brewing community through his warm, easygoing personality and incredible brewing abilities in creating masterpiece after masterpiece as Head Brewer at Bad Beat Brewing since the brewery opened in 2014. So, it’s with great regret that we must say goodbye and wish him well, as he’s off to Portland, OR, to take the Head Brewer position with Great Notion Brewing. Taking over at Bad Beat is Amanda Koeller, who also has won our hearts with her welcoming, cheerful personality and knack for brewing phenomenal brews at Big Dog’s in her role as Lead Brewer alongside Director of Brewing Operations Dave Pascual. I’m pretty sure Amanda, who has been one of the leaders of the local chapter of the Pink Boots Society, is the first woman ever to hold the top brewer position of a Nevada brewery. I think it’s a very good bet that both Weston and Amanda will excel in their new positions.

By now, everyone’s heard about NHL Vegas Golden Knights right wing Ryan Reaves being traded to the New York Rangers. But his 7Five Brewing Co., named for the only number Reaves has worn in the NHL and co-owned by longtime friend and business partner Adam Coates, isn’t going anywhere. The beers will continue to be made by Able Baker, which it has been doing since 7Five’s founding in 2018, brewing the Training Day Golden Ale, Dawn Breaker Golden Lager, Showtime Blonde Ale (an exclusive partnership with MGM Resorts available at select locations throughout their Las Vegas properties), Shiver Giver Red IPA and Grim Reaver Imperial Stout.

Yours truly was a recent guest on Food & Loathing, the new podcast by legendary Las Vegas food writers Al Mancini and Jason Harris that is “a savage journey into the stomach of the Las Vegas restaurant and bar scene.” Naturally, I spoke about local breweries and was joined by CraftHaus co-owners Dave (pictured above on the left) and Wyndee Forrest. I’m told it should post in mid-August, so in the meantime, check out the popular podcast here.

Richard Lovelady at Lovelady Brewing is continuing his collaboration with Speedee Mart in which Richard brews beers suggested by Speedee Mart owner Paul Orluske to be sold at his beer-centric Speedee Mart locations. This month’s offering is the 5% Gas Station Mexican Lager spiked with Hatch chiles and lime. You can stop by Lovelady Brewing in Downtown Henderson or elsewhere around town for Richard’s other creations, which include Lovelady Lava Flow Sour, a kettle sour with pineapple, coconut and strawberry; and the 7.5% Lovelady Lady Luck Double Hazy IPA with pomegranate puree. The Lady Luck is the second of the “homage” series to former Vegas casinos, with this one honoring the Lady Luck which opened in Downtown Las Vegas in 1964, closed in 2006 and was replaced by the Downtown Grand.

During my recent visit to Banger Brewing (the first and still the only brewery on Fremont Street), Michael “Banger” Beaman shared that in the coming months he plans to make a lot more beer styles and currently has 12 wine, bourbon and gin barrels full of aging beer. I got to enjoy the fruits of one of them—Dangerous by Default—a delicious, rich, malty 10% English-style barleywine aged for a year in a Heaven Hill bourbon barrel. As I write this in early August it’s still on tap at the brewpub, so head over to Fremont Street to experience it for yourself.

My apologies to Nevada Brew Works, for in this column last month I attributed the Patio Tangerine Shandy solely to HUDL, but it was actually a collaboration brew with their neighbor two doors down. Hurry down to the Downtown Arts District and you might still be able to snag a pint of this summer quencher at either HUDL or Nevada Brew Works. While at Nevada Brew Works, be sure to drink to a good cause and enjoy their 5% Oliver Raspberry Sour, as a portion of the proceeds go towards assisting the beer’s namesake, a local child named Oliver who is in need of medical equipment.

CraftHaus Brewery has also done a collaboration brew, this one with Reno’s Great Basin Brewing Company, which just happens to be the first Nevada brewery to open (way back in 1993) in the modern age. Called Razzle All Day, it’s an 8.5% imperial raspberry parfait sour, which according to CraftHaus’ press release is a tribute to Great Basin co-owner Tom Young and all he and his team have done for craft beer in Nevada. Both breweries came together and created a mix of two fan favorites: Razzle Fo Shazzle and Parfait All Day to create this mix of tart, fresh raspberries bursting with brightness, which were then mellowed from the addition of smooth lactose and vanilla. Look for it on draft and 16 oz four packs at the brewery in Henderson, at the taproom in the Arts District and at select craft beer retail outlets. A portion of proceeds will benefit the Nevada Craft Brewers Association to protect and promote Nevada breweries.

At long last, beer festivals are returning to Southern Nevada with several on tap for the coming months. Following is a brief rundown on each and while complete details of some of the ones farther off in the fall are not available yet, I promise to provide updates as the dates draw nearer.

First up, on Saturday, July 24, the Tuscany Suites & Casino will celebrate the 5th year anniversary of its Pub 365 with the Silver State Brewfest from 5-9 p.m. Held in the Tuscany’s Florentine Ballroom, the event will feature more than 16 Nevada craft beer breweries, live music and food for purchase. Tickets are $40 for unlimited beer sampling and 10% of ticket sales will go to the Pink Boots Society to support their mission of assisting, inspiring and encouraging women in the beer industry to advance their careers through education. To purchase tickets and to view the list of breweries pouring, visit here.

On Saturday, August 21, the Nevada Craft Brewers Association will host the Nevada Beer Bash. Held at The Front Yard at Ellis Island from 6-10 p.m., it will be an opportunity to taste several Nevada-brewed beers in one night featuring special collaborations, rare beers, live music and food pairings. VIP and general admission tickets will be available at eventbrite. Proceeds will benefit the Nevada Craft Brewers Association to promote and protect Nevada Beer.

Save the date for Saturday, August 28, as Big Dog’s will resume its quarterly beerfests, with this one dubbed Summerfest and held under the stars in the outdoor area of the Draft House. No details at this time, but I should have more next month.

Due to the pandemic last year, CraftHaus had to put their annual anniversary beerfest celebration on hold, but not so this year. Its HausFest commemorating CraftHaus Brewery’s 7th Anniversary will convene at the brewery’s parking lot on Saturday, Sept. 25 from 6-11 p.m. with pours of more than 28 beers including new releases, guest taps and barrel aged beauties. Tickets get you unlimited sampling and a logo glass and there will also be a VIP option. For more info and to purchase tickets visit www.crafthausbrewery.com.

On Oct. 16, the Motley Brews Downtown Brew Festival will return to the Clark County Amphitheater for its 9th year after having to take a brief intermission last year. One of the larger fests in the state drawing thousands of craft beer fans, more than 60 attending breweries, 200+ craft beers, culinary artists and live music acts, the amphitheater venue is centrally located and is a nice environment set in a grassy area in a circular configuration so everything is within steps. Visit downtownbrewfestival.com for more info, prices and tickets.

Sad to say the Mad Fermentist will be closing its location on the 2nd level of Three Sheets in the Arts District. To help them (and yourself) out, show up to enjoy $5 pours until the beer is gone. The most recent offerings are the fan favorite Liquidious Meniscus, a sugar plum sour; and a new twist on Cadence, a Grilled Pineapple Cherry Upside Down Cake sour. Owner/Brewer Allan Harrison says the last weekend in August will be the closing date and he hopes to return later at a new location. I sure hope he does, as I’ve always found his brews to be top notch and some of the best in town.

North 5th Brewing Co, named for its location just west of N. 5th at 60 W. Mayflower a bit south of Cheyenne, will be the first brewery ever to open in North Las Vegas. It now has its 10-barrel brewing equipment in place and has announced its head brewer, Patrick Tofte. Many in the brewing community should recognize that name, as Patrick’s a longtime homebrewer who turned his passion into a career and worked his way up at Banger Brewing from assistant brewer to the head brewer position he was promoted to in 2018. An opening date of late September is expected.

Also making progress is Nevadan Brewing Company. Owner/Head Brewer Adam Cegavske tells me they’ve submitted final plans to the City of Las Vegas, hope to break ground by early August and to be serving beer by the end of 2021. Nevadan will be a state-of-the-art two-story brewery and restaurant located in the northwest, at Oso Blanco and Farm (between Durango and Sky Canyon near the 95 Freeway). Stay tuned for more updates on both new breweries next month.

Joe Cuozzo at HUDL in the Arts District has brewed Patio, a tangerine shandy; Basement, a barrel aged golden ale; and Mosquito, a Mexican lager. Stop in to SoulBelly BBQ next door and you can enjoy some of the best BBQ in town courtesy of “Top Chef” alumnus Bruce Kalman, and the Charred & Shifty. Made exclusively for SoulBelly by HUDL, it’s a 6% American amber ale aged with ash—slivers of oak chips supplied by Kalman from a Garrison Brothers bourbon barrel soaked in bourbon—which I found to be an excellent companion to chef’s phenomenal BBQ offerings.

Richard Lovelady at Lovelady Brewing can always be counted on to bring a bevy of unique beers to his brewery on Water St. in Downtown Henderson and local beer retail outlets. This month he has Ratings Boost, a 10% triple IPA with pineapple, a collaboration with Lovelady, Speedee Mart and the Dave and Mahoney Radio show; 9th Island Paloma Sour, a 5% kettle sour with grapefruit and lemon; Speedee Mart Arnold Punker, a 6% kettle sour with tea and lemon; and Stardust, a 7.5% double hazy IPA with blackberry.