by Sophie Gayot Last Saturday, I was at the 21st Santa Monica Festival which this year included a “Food Salon.” Besides local food trucks and cooking demonstrations, there was also a farmers market “Chef Challenge” in which Nyesha Arrington of Wilshire restaurant (who appeared on TV’s Top Chef season 9) and John-Carlos Kuramoto of Michael’s restaurant had fifteen minutes to create a dish using ingredients provided from the Santa Monica Farmer’s Market and Whole Foods. The dish had to be easy to make, fast and affordable, and good, of course. With the limited facilities on the stage, it could only be cold, so the two chefs each prepared a salad. I was one of the judges along with Margo True of Sunset Magazine and Josephine Miller of the City of Santa Monica’s Office of Sustainability & The Environment. During the fifteen minutes of preparation, we enjoyed emcee Eddie Lin. I am happy to report that the winner was Nyesha Arrington. She created a salad with shaved asparagus, peaches, corn, cherries, arugula seasoned with cherry vinaigrette and decorated with edible flowers. Kuramoto composed a very different one with arugula, cucumber, corn, cherry tomatoes, avocado, jalapeño and cilantro vinaigrette. Arrington should definitely add her salad to Wilshire’s menu. You can click on each photo to enlarge. All photos by Sophie Gayot. 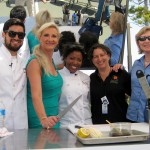 The judges in full deliberation 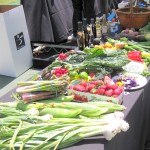 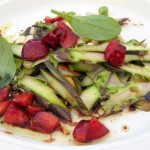 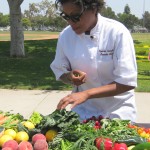 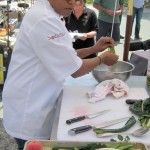 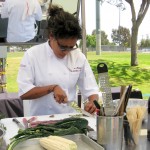 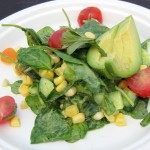 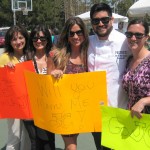 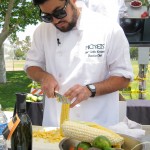 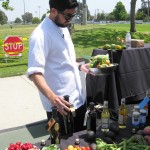 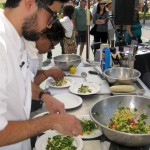 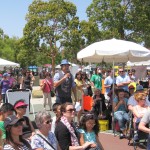 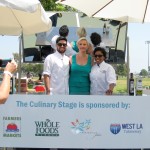 Before the “Chef Challenge” 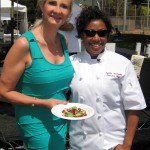