How I Do A.C. – My Atlantic City Experience A view of Atlantic City from the water

by Cara Trump Everything I know about Atlantic City I learned from TV and movies — “Boardwalk Empire,” “Atlantic City,” “Rounders.” In short: mobsters and gambling. But as I learned on a recent pre-Sandy trip to the “Vegas of the East Coast,” there is much more on offer than just slot machines, card games and a history of unsavory characters. Atlantic City is quickly becoming a destination for luxury accommodations, fine dining, shopping and entertainment. TV also told me that the famed boardwalk was devastated by Hurricane Sandy. But truth be told, only a small portion of the boardwalk in a residential area was damaged. The boardwalk outside the hotels and casinos has remained intact, the casinos reopened four days later, and Atlantic City’s public art initiative previewed on time last week. I had the opportunity to experience some of the finer things Atlantic City has to offer. I arrived at The Water Club at Borgata late one night and was greeted by a welcoming staff and a 24-hour room service menu. The room was spacious, with expansive views of the water and surrounding hotels. The next day, I decided to check out the pools at the Borgata before my scheduled spa treatment at Qua Spa, the spa at Caesars Atlantic City Hotel & Casino. Just across the hall from the elevators, the pools — one indoor and two outdoor — sit just next to The Sunroom Lounge, the lobby restaurant with an adjoining outdoor bar. Plenty of chairs provide space for lounging and taking in cocktails and light fare. I made my way over to Caesars (cabs are easily found at the front of each hotel) for the spa treatment — I opted for the Lava Melt Massage. This included a full-body massage using oils from a melting candle (that you get to choose and take home with you!). The staff is knowledgeable and friendly, which helps to establish a relaxing and comfortable environment (especially for those who aren’t frequent spa-goers). Next up was a tour of Revel, the newest addition to the boardwalk’s collection of hotels and casinos. A non-smoking, luxury gaming resort, Revel attracts leisure travelers while still catering to gaming tourists, with its 130,000-square-foot gaming floor which includes 2,000 slot machines and 100 tables. From its interior filled with gorgeous and unique lighting, furniture and art to the exterior of mirrored glass reflecting the water and blue skies, Revel was made to stand out. The resort houses high-end shopping, as well as fine dining by renowned chefs and James Beard winners and hip nightlife including HQ (which hosted world-renowned DJ Paul Oakenfold that weekend). Noteworthy hotel guests include Beyoncé, Jennifer Lopez and Michelle Obama. A special chef’s tasting menu of seafood dishes at Wolfgang Puck American Grille was certainly a culinary highlight of the weekend. The five-course tasting menu included a Maryland crab risotto, Florida grouper, peppered bigeye tuna steak and an assortment of four desserts — blueberry ice cream, blueberry pie, chocolate souffle and creme brûlée. Each dish was masterfully executed, with bold flavors that complemented one another, from one course to the next. (Be sure to check out the photos in the gallery below.) The next day held a full schedule of sightseeing — from a scenic trolley tour through historic Gardner’s Basin and residential areas of Atlantic City to a narrated boat tour that cruises up and down the boardwalk, from beginning to end, providing unobstructed views of Atlantic City and the casino-filled skyline. We ended at Tanger Outlets for a tax-free shopping scavenger hunt for great deals from national brand outlet stores, such as American Eagle, Banana Republic, Michael Kors and DKNY. For more high-end shopping, there are the Pier Shops at Caesars, as well as shops at Borgata, Revel, Harrah’s, the Trump Taj Mahal and more. After working up an appetite at the outlets, we headed to Caesars for dining at Nero’s Tuscan Steakhouse, where we enjoyed a five-course Surf & Turf menu including Maine peekytoe crab with watermelon, cucumber and roasted lemon aioli, roasted dry aged sirloin with chanterelle mushrooms, celery root puree, grilled asparagus and crispy fried béarnaise and Dover sole meunière with lemon-caper brown butter, blue crab and carrot pearls (photos in the gallery below). As if this trip couldn’t get any better, next on the agenda was a VIP backstage party at Boardwalk Hall where we were going to see live (for my first time ever)…Madonna! At a seating capacity of almost 15,000 for concerts, there were no bad seats in the house. The sets were extravagant, the stunts were impressive (including a drum line suspended from the ceiling on wires and slackliners) and Madonna was amazing, with exciting choreography and a barely-there wardrobe that has you wondering what fountain of youth Madge got her hands on. Just before the show, we got a chance to catch Boardwalk Hall’s “Duality,” a free, theatrical 3D light and sound show by Moment Factory that is projected onto the facade of the entertainment venue. New Jersey can certainly use the tourist dollars right now, and there is a lot luxury travelers can do in Atlantic City. In fact, the new campaign slogan is Can Do AC. Find out how you Can Do A.C. at www.atlanticcitynj.com Related Content: New Jersey Travel Guide on GAYOT.com Atlantic City restaurant search on GAYOT.com You can click on each photo to enlarge. Madonna photos by Tom Briglia. All other photos by Cara Trump. 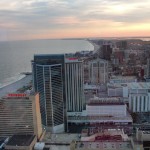 The view from the Sky Suite at Revel 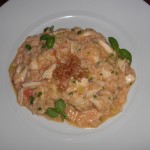 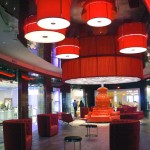 A seating area outside the shops at Revel 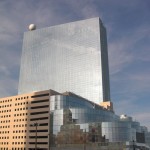 The exterior of Revel in Atlantic City 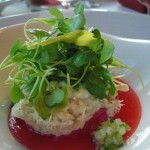 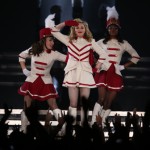 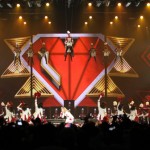 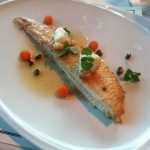 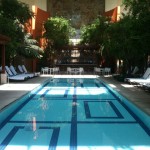 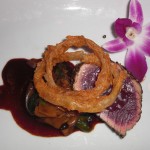 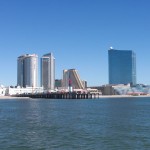 A view of Atlantic City from the water 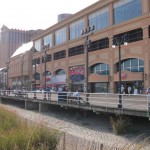 The boardwalk in Atlantic City 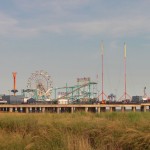 The pier at the boardwalk in Atlantic City