by Patricia Mack Don’t over-think a burger. That was Bobby Flay’s philosophy when he decided to open a burger joint. And he decided to open a burger joint after years of seeking great burgers with other chefs late at night after service was over at their fine food restaurants. “We may have been offering foie gras and caviar on our menus, but fine food isn’t what chefs are looking for after work,” said Flay, who owns well-regarded restaurants such as Bar Americain in New York City and Mohegan Sun Casino in Uncasville, CT and Bobby Flay Steak in Atlantic City. “We wanted comfort food,” said the author of the new cookbook Bobby Flay’s Burgers, Fries & Shakes. And, for him that meant a burger, especially a cheeseburger — to his mind the ultimate in comfort food. “I remember the burgers at JG Melon on Third Avenue in New York,” Flay said of the kitschy little place where notoriously bulky, juicy burgers are the signature dish. “I craved them,” he said. “And that’s what I tried to create at Bobby’s Burger Palace: a burger you crave.” So, despite the vow not to “over-think it,” he found that he had to if he was going to offer a hamburger that was unique and a cut above what was already being offered in the hamburger heaven that is the American casual restaurant scene. The result is a highly successful eleven-store chain called Bobby’s Burger Palace, the latest opening at the MarketFair Mall in Princeton, NJ. Here’s what Flay, on hand for the opening, thinks about what goes into creating the perfect burger: • The meat: Certified Angus Beef, 80 per cent lean, 20 per cent fat. The 90 per cent lean ground beef he found to be “tasteless”; the 75 per cent ground beef gets “flabby” when cooked. • The cheese: “Every foodie knows that American cheese isn’t good cheese,” said the Iron Chef and restaurateur. “But it’s the only cheese that’s right for a burger. We make our burgers with two slices.” • The bun: fresh and toasted. • The toppings: inspired by his trips around the U.S. for Food Network shows such as Food Nation and Throwdown with Bobby Flay, there are always ten on the menu and one Burger of the Month. The ten signatures range from the Palace Classic Burger with American cheese, lettuce, tomato and red onion on a sesame seed bun to the Buffalo-Style Burger with red hot sauce, blue cheese dressing and watercress. The Dallas Burger is spice-crusted with coleslaw, Monterey Jack, barbecue sauce and pickles. • The sauces: groups of five dispensers placed strategically on the counter include yellow mustard, ketchup, chipotle ketchup, barbecue and burger sauce, which is Flay’s take on a steak sauce. He also developed the recipes for the chipotle and barbecue, but the ketchup and the mustard are the classic variety because that’s the way Americans like it. “I wanted Dijon mustard but my advisors said, no, this is an American hamburger place, so we went with yellow,” he said. And the ketchup is the standard as well. “Every time I taste homemade ketchup I ask myself, ‘Why?’’’ he said. • The craving: this is the mystical element that drove him to JG Melon night after night — hard to define, and harder to invent. Then he remembered how the potato chips that used to accompany a burger order usually ended up on top of his burger. “So I came up with the idea of ‘crunchification’ which customers can ask for when they order their burgers at the register.” The chips add flavor but more importantly, texture. “A great burger isn’t just taste, it’s texture, too, and the chips give the burger crunch.” He hopes the crunch is the factor that creates a mad craving for one of Bobby’s Burger Palace burgers. More than one customer has told him not to take too much credit for this innovation. “ ‘Hey, big deal celebrity chef,’ they say, ‘you didn’t invent this. I’ve been putting the chips on my burgers since I was a kid.’” • The counter: an element you can neither eat nor taste has a unique, serpentine twist. “I knew I wanted these and the picture I drew for the designers was pretty bad, but they turned out pretty good,” Flay said. “The design lets you sit at the counter and see all the other diners and all the other burgers being brought out and all the things that are going on in the restaurant. That adds to the excitement of eating here.” For more information, check out our review of the newest Bobby’s Burger Palace Related Content: Bobby’s Burger Palace Washington, DC Restaurant Review Bobby’s Burger Palace Eatontown, NJ Restaurant Review Mesa Grill New York Restaurant Review Mesa Grill Las Vegas Restaurant Review Boy Gets Grill Cookbook Review Top 10 Burger Restaurants in the U.S. Best Burger Restaurants Near You You can click on each photo to enlarge. 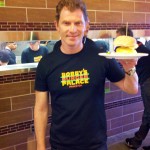 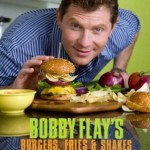 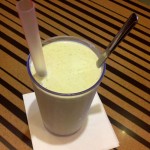 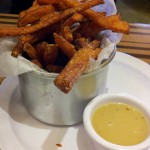 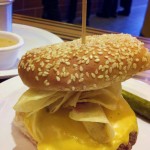