By admin
[youtube id=”s-BWAGAubq8″] by Sophie Gayot The first time I sampled Christina Machamer’s cooking a few years ago, I told millions of people how disappointed I was. I was a judge on Season 4, Episode 8, of Gordon Ramsay’s hit TV show Hell’s Kitchen, which aired May 20th, 2008, and she was one of the contestants. Among the many dishes I sampled was a pavé of salmon with a warm salad of cucumber, olives, and tomato butter sauce which she prepared that left me unimpressed. But Machamer worked very hard, and ended up the winner that season. So she moved from St. Louis to Los Angeles to be part of the opening team at the restaurant Gordon Ramsay at The London West Hollywood. Then she entered Thomas Keller‘s kitchen at Bouchon Beverly Hills. To find out where she is now, watch my exclusive video interview with her. Congratulations, Christina, for all of your past and new endeavors! For more video interviews, go to GAYOT.com’s interview page. You can click on photo to enlarge. 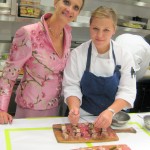