by Jeff Hoyt Most personalities do their best to make their name a household one, reinforcing their “brand” repeatedly by getting their name out there, via their performances, TV appearances, CDs, DVDs, clothing lines and every media that will have them. But singer/rapper/actor/ producer/mogul/businessman Sean John Combs has bucked that trend, changing his name over and over again while continually staying in the public eye: Diddy; P. Diddy; Puff; Puffy; Puff Daddy; King Combs. Even his clothing lines utilize two different names based on his birth name: Sean John and “Sean by Sean Combs.” But the multiple Grammy Award winner has only one name for his vodka: Ciroc. When he became a brand ambassador in 2007, the French vodka was only selling about 10,000 cases per month. With the entrepreneur pushing the product, and sharing in the brand’s profits, sales were about 400,000 cases in 2009, and reportedly close to 1,000,000 cases last year. No wonder the singer now refers to himself jokingly as “Ciroc Obama.” On a recent promotional visit to LA, the personable Combs wowed the crowd calling the grape-based vodka a “party in a bottle.” He claimed that Ciroc is now “the #2 ultra-premium vodka in America” and that Ciroc flavors — red berry, coconut and peach — “generate more revenue than any other vodka brand flavors.” We were impressed with the peach-flavored Ciroc. Before posing for photos, the star got a laugh by warning, “No one likes someone who has one too many. Take it from someone who knows.” Check out our top 10 vodkas list. To learn how celebrity endorsements can go wrong, read our earlier blogs about rapper T.I. and Rémy Martin Cognac. You can click on each photo to enlarge. 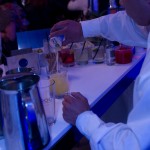 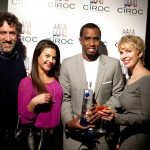 Sean John Combs with Jeff Hoyt and others 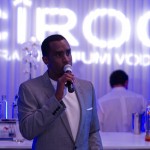