My Life as a [Molecular] Blog With the world’s population expanding like a hot air balloon readying for flight, our food supply needs to be addressed at a macro level by huge food ingredient firms such as CP Kelco. Still at a macro level, this global company, owned by the J.M. Huber Corporation, is itself the result of a merger of the Danish company Copenhagen Pectin, the Finnish company Noviant, and the American Firm Kelco Company. CP Kelco is a leading producer and supplier of specialty hydrocolloids – a family of materials designed to control the rheology (flow behavior) of water in various systems.

Now, all this becomes a whole lot more fun at the micro level. Some of you have heard of molecular gastronomy and chefs such as Heston Blumenthal at The Fat Duck near London, Thomas Keller at the French Laundry in Yountville, California, Adrian Vasquez and Michael Cimarusti at Providence in Los Angeles and Grant Achatz at Alinea in Chicago. They all use these inoffensive powders to wow their customers. Following the quest for fire in human food consumption, there was Nouvelle Cuisine [something we spearheaded much later], but in a way, molecular cuisine has been around, too. It’s just very hip for some and very silly for others. Luckily, we spent a few hours with a live Tintin-look-alike of a not-so-mad food scientist to help us understand all of this at CP Kelco’s research and development laboratory in San Diego.

Upon arrival at the site, we were not sure what to expect. But when we saw Ted in his white lab coat greeting us at the gate of the secure facility, we immediately knew there would be lab time, especially with the thermometer and other tools hanging from his pocket. The lab is actually the office of Scientist Ted Russin, M. Sc. Food Science.

Ted, who grew up in Canada, has always had a hand in food. At a young age, he was fascinated by Cool Whip, and, always curious, wondered about such scientific questions as what was the perfect way to make Kool-Aid. In junior high school Ted carried out a science project which focused on the nutritional content of chocolate bars, which was quickly followed-up by another chocolate-based science project focusing on the functionality of chocolate cake ingredients, which involved baking 200 cakes and altering the ingredients in different combinations to observe the results. Later, during his humanities studies of philosophy he concurrently completed culinary training, and a stage at one of Canada’s top 100 restaurants. Long gone is the dream of becoming a philosopher and now it’s all about creating new foods, developing food products and in the process saving lives.

“My life is all about hydrocolloids now,” says Ted. “We break everything down to a fundamental level which allows us to understand it and then we can create new food applications.” The organism which produces xanthan gum was discovered in the 1950’s growing on cabbage, whereas the organism which produces gellan gum was discovered more recently (1980’s) growing on a lily pad. In both cases these organisms produce biopolymers which control water’s physical behavior. By extracting and purifying these biopolymers CP Kelco produces hydrocolloids that can impart various functional properties such as slowing down water molecules (thickening), or providing heat resistance. Ever wonder how the oil and vinegar stay in perfect suspension in some salad dressing? You have to thank guys like Ted for that. “Our products are typically sold in 25 Kilogram bags to industrial customers, so we are very far away from a retail store, but you can buy our hydrocolloids through Le Sanctuaire online and top chefs have published recipes in their cookbooks for you to try at home.”

After the recent scare at The Fat Duck, which was closed after patrons fell ill, we were wondering if these products could be toxic. In the case of Ted’s lines, we felt reassured that they are safe. Despite his busy schedule, Ted finds time to create his own recipes and shows up at prestigious centers of higher learning such as the Culinary Institute of America to satisfy students’ curiosity. Instead of spending a lot of heat energy, you could whip up a perfectly consistent raspberry coulis in five minutes, or make a roux that would please your cardiovascular surgeon. Applications are endless. We asked Ted if he could find a way to keep the water stable in our bodies to keep our skin looking young. “Well, if we can stabilize bone marrow in a dish, we could give it a try?”

Upon leaving our experiments, we asked where Milou was (Tintin’s shadow of a dog in the Belgian cartoon) but rest assured, Ted is doing a whole lot better than Tintin, as he was greeted on the way out by his gorgeous nutritionist girlfriend. We are happy to report that Ted is doing very well. Can you imagine a job that you enjoy, where you get to save people, travel to pass on knowledge, work with creatively crazy chefs and eat fun stuff? He has it almost as good as we do! 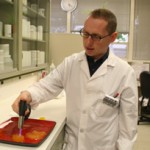 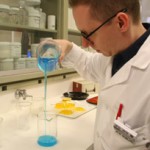 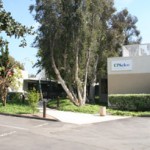 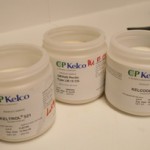 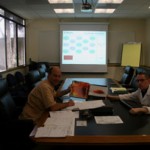 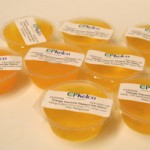