Dine Out For Less Los Angeles Mayor Antonio Villaraigosa, who loves food and good wines, changed his packed schedule so he could announce the launch of the third dineLA/Restaurant Week at this morning’s press conference at Wolfgang Puck Bar & Grill at L.A. Live.

The last two editions of the program have been so successful that it is now being conducted twice a year instead of just once in January. The participating number of restaurants has also grown from 175 to 260.

Mayor Villaraigosa pointed out that the diversity of Los Angeles’ palates is due to the diversity of the many cultures found in the City of Angels. He also added that he will try to eat at as many restaurants as he can during the two-week period, October 4-9 and October 11-16, 2009.

dineLA is a good way to discover or rediscover restaurants in the Los Angeles area through specially priced three-course meals, ranging from $16 to $28 for lunch, and $26 to $44 for dinner. For a complete list of participating restaurants go to www.dineLA.com/restaurantweek. 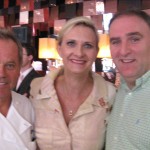 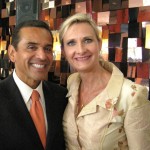