By admin
[youtube id=”wkxkGQerRVE”] by Sophie Gayot The chic street Melrose Place in West Hollywood, California, must have been happy to see Fig & Olive open its doors there last March. After the success of three outposts in New York City and one in Westchester, New York, a Los Angeles location became a natural fit for the group presided by Laurent Halasz. The restaurants’ cuisine is based on their name: no butter, no cream, just many different kinds of olive oil, and lots of dishes that feature figs. Watch my exclusive video interview with executive chef Pascal Lorange to see how he manages to have figs all year-round on the menu. Salmon à la Andalucia is a particularly well-thought-out dish. The seared organic fish is sitting on a bed of zucchini, fennel, tomato, chickpeas, verdial olives, and seasoned with fresh oregano, garlic and lemon Picual olive oil. Because of the many ingredients, every bite yields a different taste. It makes for a very flavorful and playful degustation. If you are in Los Angeles for Bastille Day July 14, Fig & Olive will be celebrating the French national holiday with a complimentary French wine and cheese tasting — presented by Vins de Provence from 4:30 p.m. to 7:30 p.m.; and a two-course prix-fixe dinner ($50++ per person). Paired with your choice of Provençal wine, signature dishes include a fig & Gorgonzola tartlet with prosciutto, walnuts, tomato, and arugula on a fine puff pastry; and striped bass papillote with zucchini, eggplant, fennel, tomato, thyme, scallions, and saffron, served with Arbequina olive oil and chive mashed potatoes. And while we’re on Provence, during the opening night of Fig & Olive, I was happy to meet the mayor of the city of Mougins. Mayor Richard Galy was in LA to promote the sixth edition of the Festival Gastronomique de Mougins Les Étoiles de Mougins to be held in his city from September 16 to 18, with chef Eric Frechon of Hôtel Le Bristol in Paris as guest of honor. GAYOT.com features the best restaurants to celebrate Bastille Day in Los Angeles,  San Francisco and New York City For more exclusive video interviews, go to GAYOT.com’s Chef Interview page. Keep up with the LA dining scene with Los Angeles Restaurant Reviews, LA News, LA Culinary Events and LA Wine Dinners You can click on each photo to enlarge to see dishes from Fig & Olive restaurant menu. All photos by Sophie Gayot. 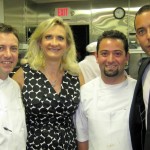 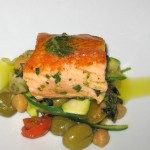 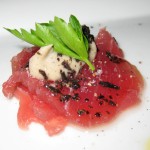 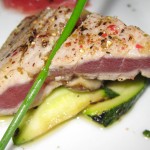 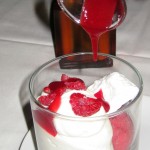 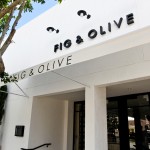 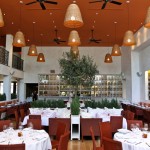 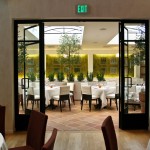 The patio at Fig & Olive 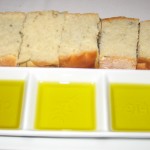 A selection of olive oils and bread 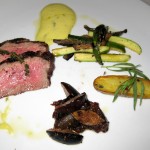 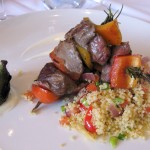 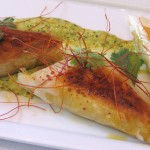 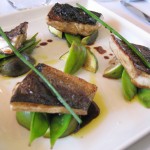 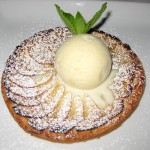