Most of us, especially women, associate the name Salvatore Ferragamo with a high-end designer of shoes and handbags. And for the right reasons. It was for noted actors that Salvatore originally designed the pieces. “Next time you see a photo of Marilyn Monroe with her skirt flying in the air, pay attention to her shoes,” says Salvatore Ferragamo, the designer’s grandson in charge of the Il Borro wine program back in Tuscany.

We had the opportunity to sample new releases from the estate at Fleming’s Prime Steakhouse & Wine Bar at LA Live. A new era for sure, but the wines are crafted with the very same care and quality as the fashion items. The good thing, though, is that the pricing is actually quite reasonable, delivering a good value.

Since it was all in the family, Salvatore snuck in some of his Uncle Massimo’s production: a 2003 Brunello di Montalcino from Castiglion del Bosco. Wow! I much prefer a case of that than a new briefcase from the fashion house.

Chef Partner Calvin Holladay worked hard with sommelier Evan Tsuchiyama to create a perfectly paired five course dinner. For example: petite lobster and shiitake mushroom ravioli in a sun-dried tomato cream sauce with the low oaked 2006 Il Borro Lamelle Chardonnay or a Prime New York “Chiantigiana” steak accompanied with Sauteed wild mushroom in red wine and rendered pancetta with the flagship IGT –Super Tuscan 2006 Il Borro Toscana. Fashionable wine shall we say? No wonder Marian Jansen op de Haar, Director of Wine at the distinguished Fleming’s chain of steakhouses, was there to award him their Supplier of the Year award.

For more information on Il Borro visit www.ilborro.com and to learn more about Castiglion del Bosco wines check out www.castigliondelbosco.com.
You can click on each photo to enlarge. 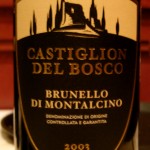 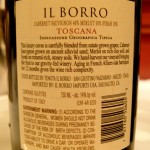 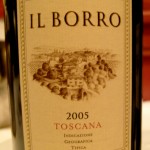 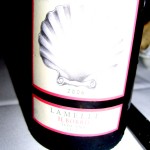 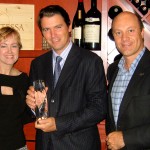