by Barnaby Hughes As the clock ticked down on California restaurants serving foie gras legally, many of them prepared special foie gras menus. On June 30, I had the pleasure of enjoying a “Gone But Not Foiegotten” menu at Beer Belly in Los Angeles. By the time I arrived, the Foie-Q You foie gras sliders with pickled shallots, quail egg and spicy apple beer mustard was already sold out, so I ordered the seared foie gras. When I asked owner Jimmy Han why my order was taking so long, he joked, “Oh, that dish takes foie-ever.” Chef Wes Lieberher used the same joke in naming his creation Foiever, which was my favorite dish. The seared foie gras with cinnamon caramel apple, red wine shallots and celery root purée seemed more at home at a fancy French restaurant than this Koreatown craft beer bar. The foie gras dishes boasted inventive names and combinations, and the bar offered beer pairings as accompaniment. Protestor Fries, Lieberher’s twist on his usual Duck Fat Fries, was topped with foie gras Hollandaise and truffle ketchup. The inventive chef showed his Philadelphia roots with his Benjamin Foieklin, a riff on the classic Philly cheesesteak containing foie gras cheese whiz. Beer Belly’s lineup of carefully-curated local craft beers and comfort food menu typically attracts a youngish, diverse crowd. For this menu, the restaurant was the busiest I had ever seen it, and the foie gras dishes proved so popular that by 9 p.m., the only remaining item not sold out was the Deep-Fried Foiegoreos – deep-fried Oreo cookies topped with foie gras icing, strawberry purée and Nutella. Despite the success, it looks like this foie gras menu will be the last one offered until the law changes. California’s top chefs have started the Coalition for Humane and Ethical Farming Standards, abbreviated C.H.E.F.S., to fight the ban and reverse the law. Join them by signing their petition against the ban at http://chefstandards.com/support-humane-ethical-farming-standards/ You can click on each photo to enlarge. 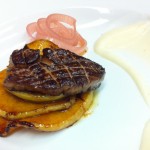 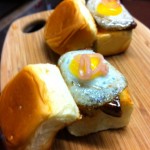 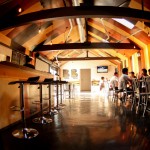