By admin
[youtube id=”gMfEwzrQFug”] by Sophie Gayot The historic Hôtel de Crillon, located right on the Place de la Concorde in Paris, will be closing its doors around autumn 2012. But there is a happy ending, as it will reopen about two years later completely renovated from top to bottom, every corner and space. It will also include the addition of a new spa. The façade just recently received a facelift. To hide the scaffolding — and help preserve the grandeur of the Place de la Concorde — the outside of the building was covered for a year with a tarpaulin printed with a reproduction of the exterior. (The recycled cloth has since been turned into hand bags, each one-of-a-kind, which are available at the hotel gift shop.) Now we must talk about one very important part of the hotel: the restaurant Les Ambassadeurs, orchestrated by 30-year-old chef Christopher Hache. This former ballroom, with views of the Place de la Concorde, was restored a few years ago making it an even more stunning setting for an unforgettable lunch or dinner. Hache was lucky enough to have entered such a temple of gastronomy in 2010, at just 28. But was it luck or hard work? Just look at his résumé: Les Élysées du Vernet with Eric Briffard, Lucas Carton with Alain Senderens, Régis Marcon, restaurant Alain Senderens, Le Bristol with Eric Frechon, and La Grande Cascade with Frédéric Robert. Before the announcement of the closing, it was already difficult to get a table at Les Ambassadeurs. Now it will be booked months out — unless maybe you’ve reserved the Louis XV suite, which boasts a terrace overlooking Place de la Concorde and Paris. Watch my exclusive video interview with Hache to get a glimpse of it. Another way to experience the chef’s cuisine this summer is to book a table for lunch at Le Patio, where a menu offering an appetizer, main course and dessert (€ 68) is served Monday through Saturday. Some history: In 1758, Louis XV commissioned architect Jacques-Ange Gabriel, the King’s First Architect, to build two façades on what was then called Place Louis XV, formerly known as Esplanade du Pont-Tournant. This huge project, in regards to city planning, was the most important creation during the Siècle des Lumières (Enlightenment) in Paris. The Place de la Concorde, as it was later named by Napoléon in 1800, is the largest public square in Paris. The massive work was supervised by “la marquise de Pompadour,” the King’s mistress, who we are also grateful to for initiating the manufactory of Sèvres, the Petit Trianon and the École Militaire. Behind one of the façades, a majestic private mansion was erected to host the world’s special ambassadors to the French crown. In 1788, the Comte de Crillon acquired the building, and gave it his name. The Crillon remained a family home until 1907, before becoming a hotel in 1909. You can click on each photo to enlarge to see dishes from Les Ambassadeurs restaurant menu. 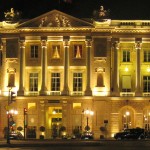 The renovated façade of Hôtel de Crillon at night 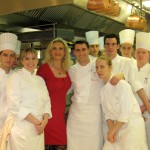 Christopher Hache and his team with Sophie Gayot 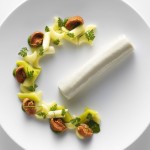 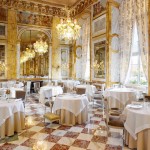 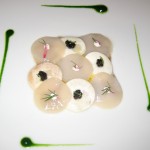 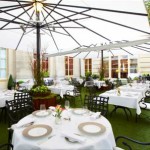 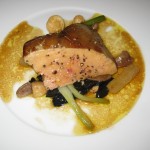 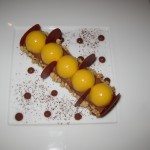 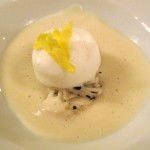 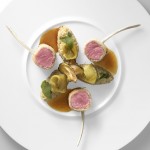