By admin
[youtube id=”P7a_7_bsRrk”]
by Sophie Gayot
Perhaps you’ve heard the same rumor I have: that that Spago Beverly Hills was going to relocate to the Hotel Bel-Air, which is currently closed for renovations. The rumor makes perfect sense, as the landmark hotel is part of The Dorchester Collection, famous for attracting top chefs. Don’t they have Alain Ducasse at the Hôtel Plaza Athénée in Paris and Yannick Alléno at Le Meurice restaurant (redecorated by Philippe Starck)? And, they could certainly afford it.   During a recent lunch at Spago, I learned (at least, it was true that day) that the restaurant is not moving, but that the Hotel Bel-Air will be getting a new restaurant operated by Wolfgang Puck! Puck is no stranger to hotels: the neighboring Beverly Wilshire Hotel houses CUT, while The Ritz-Carlton, Bachelor Gulch has the Colorado version of Spago. The fact that the restaurant isn’t moving should make the city of Beverly Hills and Spago’s fans happy, as regulars love to start their weekend with the ritual Friday lunch there. Although Spago Beverly Hills is not changing its address, it is changing its look. A new décor is planned; I will keep you posted as I learn more. Also, chef de cuisine Thomas Boyce has left the restaurant for Oregon where he wants to raise his children with his wife. Sous-chef Tetsu Yahagi has been promoted and is now in charge. Have no fear; Yahagi is as good as the chef he is replacing. I was lucky to spend time in the kitchen as he prepared a Burrata heirloom tomato salad and the famous tuna tartare in sesame cones topped with bonito flakes, and recorded it all on my exclusive videos with chef Yahagi. As I was in the kitchen, pastry sous-chef Zairah Molina was testing out a new blueberry pie, so I captured that on video as well. As a critic, I was able to give her positive feedback, and I’m happy to report that the pie is going on the menu. Exclusively for GAYOT.com readers, here are my Spago videos: • Chef de cuisine Tetsu Yahagi preparing a Burrata heirloom tomato salad • Chef de cuisine Tetsu Yahagi preparing tuna tartare in sesame cones topped with bonito flakes • Pastry sous-chef Zairah Molina testing a blueberry pie   You can click on each photo to enlarge to see pictures fron Spago Beverly Hills restaurant menu. All food shots by Sophie Gayot. 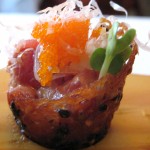 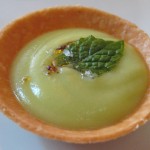 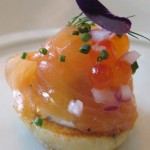 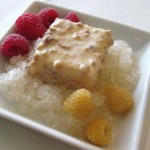 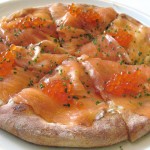 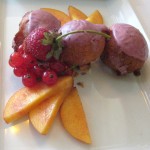 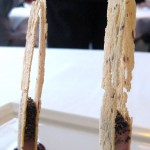 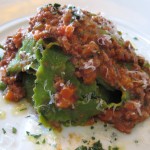 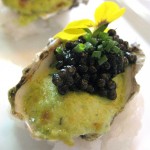 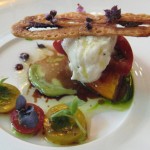 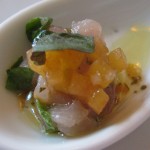 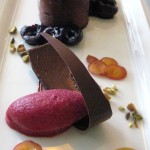 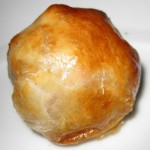 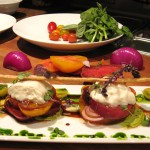 The salad being prepared in the kitchen 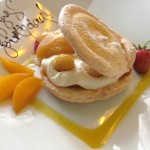 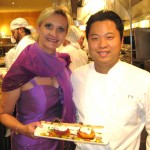