A Korean Weapon of Mass Nutrition Kimchi, a brined cabbage and turnip dish, is an ubiquitous part of Korean cuisine

by André Gayot   While the leaders of the twenty richest nations — the G 20 — gathered in Seoul, South Korea, to discipline the ministers of finances, bankers and traders of the world, the Koreans had their own, more direct, worries.   Because of bad weather, there was a dearth of cabbage on the markets. “A national tragedy,” proclaimed the press, supporting angry citizens. Cabbages and their derivatives being an essential part of the Korean diet, President Lee Myung-Bak decided that cabbages would be imported from China. Mais voilà, Koreans don’t like Chinese cabbage. What made the shortage even worse was the timing. This is the season when all Korean families practice a ritual: the preparation of Kimchi.   Kimchi is a condiment and a dish that has to be on every table every day — and is. It consists of brined cabbage and turnip eventually mixed with a paste of red peppers and garlic, but there are a myriad of variations. Each family has its secrets, whether it is the addition of eggplant, cucumber, sesame or chive. The delicacy is then kept in jars or coolers in the kitchen, the garden or on the balcony and eaten year-round. There are industrial versions, but for the traditionalists, such a perversion is a sin. Kimchi is a significant emblem of Korea’s gastronomical culture; nationals are proud of it and can’t think of living without it. There’s even a museum devoted to Kimchi and a popular celebration is held annually.   Not only do Koreans think it is a delicious food, but also a panacea. Rich in fibers, minerals and vitamins, it helps digestion and lowers cholesterol. The South Korean government has wondered why Korea would keep such a natural wonder for herself, when it could be exported to the rest of the world? So with the help of 100 scientists and nutritionists (and probably marketers), a World Kimchi Institute has been created with the purpose of globalizing Kimchi to glorify the gastronomical image of Korea and complement the already remarkable export efforts. Kimchi could help to feed the whole world.   The latest news is that Koreans were reassured when they learned that the next cabbage harvest looks promising and observers say that the Kimchi scare is over. The G 20 conference had some success, too: they were able to shoot a rare picture of twenty smiling heads of state. However, for fixing the world disorder, it seems they need some more time and they will talk about that at the next conference.   The Pulmuone Kimchi Museum A Recipe for Baechu Kimchi   You can click on each photo to enlarge 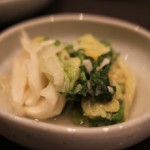 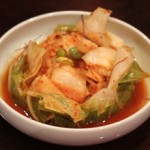 Kimchi is an excellent accompaniment to most entrees in Korean cuisine 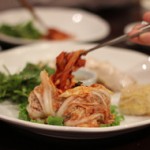 The artful presentation of kimchi at a Korean restaurant 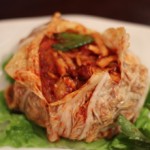 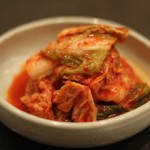