When the American Dream Has a Taste of Brie

By admin
[youtube id=”fAK_OYdpki8″] by André Gayot Who wasn’t bewildered by the magnitude and the architectural riches of the South Coast Plaza in Orange County, California, when it first opened in 1967? We were among those filled with admiration for the shining, marble-tiled, majestic alleys of what was then one of the largest shopping malls of the world. (Of course, that is now dwarfed by The Dubai Mall). Today, we remain impressed with the flamboyant style of this cathedral of consumption adorned with the names of the luminaries of the chicest commerce of the globe. Overwhelmed by the Gucci’s, the Tiffany’s and the Louis Vuitton’s, we like to pause and seek some relief from grandeur in a human proportioned asylum, with the reassuring French name, “Marché Moderne.” The first time we walked in, a cheerful, chubby man, obviously helpful in these circumstances, showed up and said, “My name is Florent.” “Nice fragranced name,” I replied. “Where do you come from, Florent?” “You would never know!” “Even so….” “I was born in a small French village named La Croix-en-Brie.”  I nearly collapsed, as I explained to him, “I have a house in the fields, a stone’s throw from La Croix!”   Since then, I have returned to La Croix-en-Brie, which was also a hideout for the Knights Templar, met Florent’s family, and heard from them how he started this amazing journey from the fertile wheat fields and green meadows once tended by the Celts and later the Romans, where cows graze and are milked for the famous Brie cheese, all the way to the gilded alleys of the rich New World. Sorry to disappoint you. This is not a fairy tale and there’s no magic wand to explain his success. It has two components: vocation and labor. As soon as he could talk and walk, Florent proclaimed loudly that he wanted to be a cuisinier. At eight, he helped his mom — a wonderful lady — can the preserves and peel the carrots and the potatoes from their own garden behind their modest dwelling. At 12, he was apprenticing at Le Dauphin (now defunct) in Nangis, a historical town where Jeanne d’Arc attended mass as she was marching to deliver Orléans then occupied by the British, and where Napoléon conducted his army in one of his last combats. But Florent was more interested in the history of gastronomy and his assiduity opened the doors to many good places in France and later in the U.S. where he ended up at Aubergine, then the food mecca of Orange County, before his consecration. Florent is now happily married to a sweet lady, Amelia Marneau, who is also the talented pastry chef at Marché Moderne. You can watch our exclusive video interview with her on GAYOT.com’s YouTube Channel. Florent’s story has all the necessary ingredients to satisfy the good souls and the bastion of those who believe in the reward of good actions: work, honesty, talent, family, perseverance, patience and finally success. The American Dream came through…with a slight scent of brie. Bon appétit!
GAYOT.com has information on the top South Coast Plaza restaurants, news and reviews for restaurants throughout Orange County, and an Orange County twitter feed.
You can click on each photo to enlarge. All food shots by Sophie Gayot. 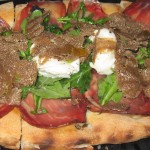 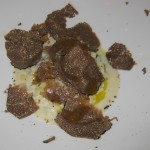 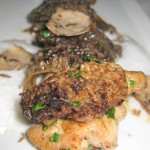 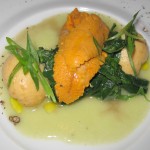 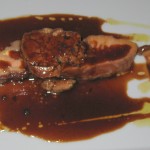 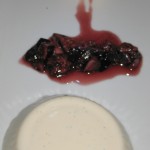 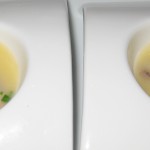 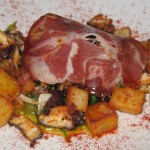 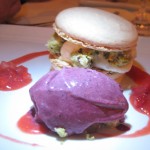 Macaron of mascarpone with pistachio streusel and cassis ice cream 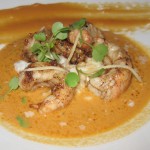 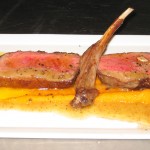 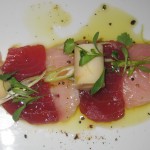 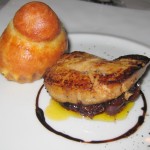 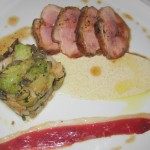 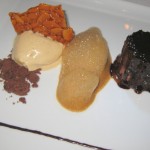 Cannele gelato with café chocolate gateau and crème of espresso 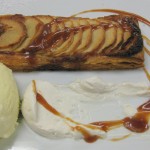