by Sophie Gayot When sbe executive chef Danny Elmaleh approached Mercato di Vetro chef de cuisine Mateo Rogers with the idea of doing a blackberry bacon pizza, he was intrigued. So was I when Rogers told me what kind of pizza I was holding when we took the picture above at sbe’s West Hollywood, California restaurant. I had to try it. Hey, why not? And, you know what? It actually works. It is a fun play on the toppings of the dish that Wikipedia defines as “an oven-baked, flat, round bread typically topped with a tomato sauce, cheese and various toppings.” When dining at Mercato di Vetro, two must-haves are the chicken liver crostini, with fig jam and pickled shallots; and the hen of woods topped with aioli and parmesan. To see more dishes, visit our Mercato di Vetro photo gallery. If you head there on a Monday, you can enjoy any pizza or pasta with a Peroni for $15. And on Sundays, indulge yourself with the “Sunday Supper” which includes an antipasti, entrée and dessert for $24. Mangia! You can click on each photo to enlarge to see dishes from Mercato di Vetro menu. All photos by Sophie Gayot. 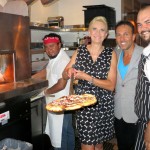 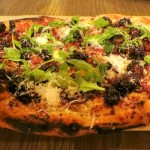 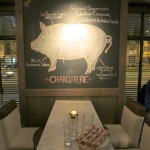 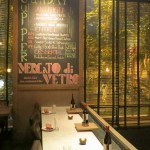