Of Cars and Pans: Culture Shock at the Assembly Line by André Gayot Remember the riddle about the ideal world in which the Italians would be in charge of singing opera, the British would prepare the tea, the Chinese would fry the rice, the French would do the cooking and serve the wine, the Germans would build sturdy cars and be police, etc. That’s the image of the world that we were so comfortable with thanks to the well-worn clichés. Something must have gone wrong: it’s hard today to recognize these established values in the same spots. I don’t know about the current state of the police. I could, however, verify that the Germans can for sure still manufacture speedy cars, but the big surprise is that at the same time, they can also cook in the same premises, and cook well. In Porsche‘s impressive plant in Leipzig built in 1999 that evokes a space station, the engineers keep engineering as always. But the miraculous novelty is that, since 2002, the cooks are cooking. So along with the brake pans and the oil pans are now sauce pans! Although I have no qualification to evaluate the merits of automobiles, I understand the consensus is that these vehicles are much appreciated. That said, foodwise, I am authorized to affix a high ranking note in favor of “Porsche Gastronomy.” In this “Kolossal” diamond shaped restaurant on the third floor of the plant offering a panoramic view over the race track and the off-road course, 700 guests can be seated and served the well prepared food of Norbert Ritzmann, a seasoned chef who honed his skills in the best German and French establishments. As I was sharing the dinner with several hundred Americans, I was not the only one to enjoy and savor Ritzmann‘s talent. Following a light baby leaf salad tossed in Sherry vinegar with fried oyster mushrooms, he served a well-fried Barbary duck breast with black currant and pepper sauce with French beans and roast potatoes that arrived warm despite the many tables of our crowd. A tip: if you buy a Porsche, pick it up at the plant. They might grant you a free excellent meal and you may sense the culture shock at the assembly line. For more on Leipzig and East Germany, be sure to check out our comprehensive East Germany Travel Guide. You can click on each photo to enlarge. 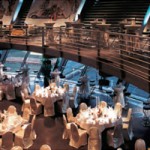 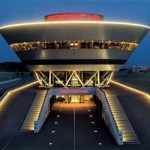