Join me at BOA Steakhouse in Santa Monica on Sunday, March 14th, from 6:00 p.m. to 8:00 p.m., for the third edition of Raising the Bar, a cocktail competition created by Joe Miller of Joe’s restaurant in Venice that is free to attend.

Along with Miller, owner of Church & State Yasmin Sarmadi (you will be able to ask her directly what is happening at her restaurant with the departure of chef Walter Manzke), Michael Cardenas (owner of BOA, Sushi Roku, Katana, Delphine and Lazy Ox Canteen), and Victoria Recano (anchor of KTLA’s 6 and 10 p.m. newscasts), I will be judging three different cocktails created by the competing mixologists representing Comme Ca, BOA, Joe’s and Church & State. From personal experience, I can tell you that the longer the event goes on, the more fun it gets.

Round two of Raising the Bar was held on November 15th at Comme Ca. The battle was so fierce that there was a tie at what should have been the end of the competition. Finally, Tim Loden of Comme Ca won after the bartenders went into overtime to mix additional drinks. A special thank you to David Myers for all the food he sent us from the kitchen so we could keep sober!

The competition started with all of the mixologists making a Sidecar. They then designed their own Bourbon drinks. Hector Bury of Joe’s added sweet Vermouth and simple syrup and used a spiced pumpkin gel pop as a swizzle stick. Tim Loden mixed a drink called The Nutcracker that utilized cream and honey, egg white, muddled dates and sage, served in a rocks glass with a block of ice and grated nutmeg. Shana Street of Church & State created a cocktail called Not Your Grand Mom’s Apple Pie using apples, cream, apple cider, liquor 43, and rimming the glass with caramel and crusting it with graham cracker.

For the freestyle round, Bury made a Sazerac (Angastora and Peychaud’s bitters, Sazerac, and an absinthe rinse of the glass). Loden mixed a cocktail called a Velvet Underground (2 oz. Bourbon, 1/4 oz. Vermouth, 1/4 oz. yellow Chartreuse, 3/4 oz. orange juice). And Street created a rum Bloody Mary with pickled onions that she called Redrum. 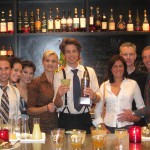 The contestants and the judges (from left to right): Judge Nicholas Liberato 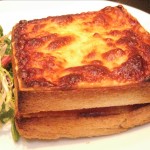 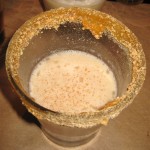 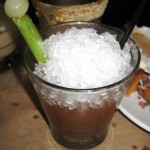 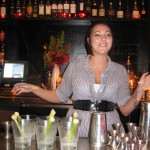 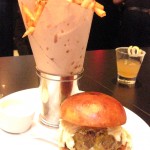 Slider and fries with a Sidecar in the background 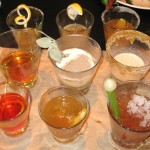 The three rounds (for top to bottom): The Classic 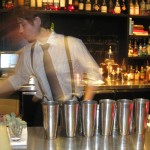 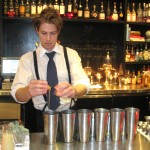 Tim Loden cracking an egg for The Nutcracker (2oz Bourbon 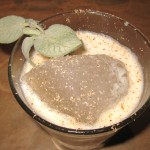