Riesling on the Rise! Riesling & Co. 2011 Vintage Tasting in Tribeca by Michelle Kwan German engineering, bratwurst, beer. These three things come to mind when thinking of Germany. But wine? Not so much. Flanked by France and Italy, Europe’s powerhouses of winemaking, Germany has long existed under the shadow of these two regions — despite the fact that Germans began making wine more than eight centuries ago. The German Winegrowers’ Association has been taking its vintages on tour in parts of Europe and the United States for several years now in an attempt to introduce German wines to the industry and public alike. Germany’s 2011 vintage has proven to be “the best in recent years,” according to Norbert Weber, president of the Association. Germany’s soil works together with the climate to produce primarily Rieslings and Pinot Blancs, with the former most recognized in the industry. Rieslings range from very dry to very fruity depending on the sugar alcohol level at processing, and the versatility of this wine makes it equally ideal for both pairing with food and drinking on its own. We sampled these at the Riesling & Co. Vintage Tasting at the 360° event space in Tribeca on May 10. The featured wineries were concentrated in the regions of Baden, Mosel and Rheingau. Weingut Dr. Heger featured a crisp 2010 Grauburgunder Spätlese and a 2010 Dry Riesling Grosses Gewächs with good balance and acidity. The 2011 Dry Riesling “Red Slate,” named for the distinctive terroir from which it is produced, had a clean finish and good minerality. Despite the emphasis on Rieslings, Germany also produces a variety of reds (though many of them have yet to make their way to the United States), including a bold and fruity Pinot Noir from Mosel and a drier version from the Rheingau with considerable complexity. In comparison to its neighbors, Germany remains largely untapped as a winemaking region for the U.S. But if the 2011 vintage is any indication, their varietals are definitely worth exploring! For more information, visit http://www.germanwineusa.com/ You can click on each photo to enlarge. All photos by Phillip Angert for Wines of Germany. 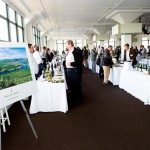 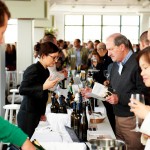 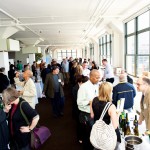 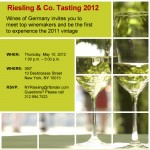