The Global Show of Savor By André Gayot As the world gets global and progressively engulfs its denizens into a single one-fits-all mold, it’s an encouraging sign that here and there some rebels are proclaiming a personality of their own. Interestingly enough, the affirmation of such an individualism stems from the food, not as a raw material, but from the understanding we have of it and the procedures we invent to process it. I had the privilege to observe such a comforting manifestation where last week in Puerto Rico when I attended the third annual “Saborea” (Spanish for “Savor” or “taste) event. It takes place along a sandy beach fringed with coconut trees on this American-style Caribbean island. The tropical setting is enough to tell what is reasonable to expect under these latitudes. Indeed, location, tradition, and production determine ipso facto the limits of the gastronomy. But imagination, this essential human addition, can transcend—or not—the regional capacities. That’s why it was such a lively spectacle to watch these 28 local cooks displaying skills and talent to showcase the character of the Caribbean cuisine in a demonstration kitchen theater where personalization superseded uniformity. This is an occasion to discover or rediscover the tastes and saveurs that are rarely perceived in our metropolises, at least not with the same intensity and authenticity. With the explanations of our local colleague Yaira Solis Escudero, who is also instrumental in the Saborea program, it’s enriching to enter into the core of the “Mofongo” (the popular Puerto Rican dish made from mashed fried plantains and meat or seafood), to follow the steps of the chefs and appreciate that the “sofrito,” for instance, is the seal of approval of the genuine Caribbean cuisine. Sofrito is the seasoning (pork, ham, lard, oregano, onion, garlic, green pepper, chili, cilantro) used to flavor most of the Puerto Rican dishes. It is a trait of character that must be preserved to maintain the cachet of this cuisine. It’s probably a good idea that the locals invite cuisiniers from abroad and observe their savoir faire and tour de mains (dexterity). It can help them to hone their own deftness. A caveat, though: it would not be so good to copy them to the extent that, at the end of the day, it would wind up in the debasement of the local values. “Molecularizing” an apple with olive oil and liquid nitrogen is fun to watch, but let’s hope the plantains, mangos, pineapples, and other local fruit will be spared such a mutation. Cooking obviously has become a show. Let’s not forget it’s (also and primarily) an art.
You can click on each photo to enlarge. 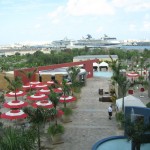 A view of the San Juan Harbor 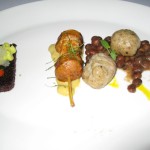 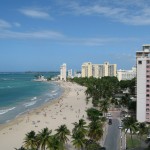 The beaches of San Juan 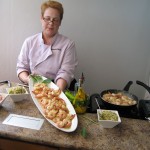 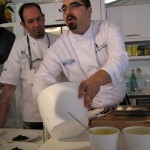 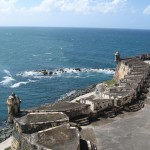 A view from an old fort in San Juan