by Barnaby Hughes When you think of where American beers are made, your thoughts may go to Milwaukee, but San Diego? This Southern California city has more than 30 craft breweries, as well as multiple tour operators whose mission it is to provide safe and convenient access to them. My friends and I joined Brewery Tours of San Diego for a Saturday excursion which included nearly unlimited beer samples and a pub lunch. Once we caught up with the minibus at 10:30 a.m. — they offer multiple pick-up points including downtown San Diego and Mission Bay — we were quickly delivered to Ballast Point Brewing & Spirits for a brewery tour. We saw the mashing tuns, fermenting tanks and kegs waiting to be shipped to a pub near you. Our bus driver and tour guide, Mae, gave us a brief lesson in how beer is made and then escorted us back into the tasting room. At the long bar, we began with a taster of Wahoo Wheat Beer (4 per cent ABV), a mild Belgian-style white beer that Mae chose for our group. After that, we could choose from the more than two dozen beers on the menu. The Indra Kunindra Curry Stout (7 per cent ABV) sounded intriguing, but tasted more of cayenne than curry. I didn’t really enjoy it, nor the Serraño Pepper Pale Ale (5.2 per cent ABV) that one of my friends chose. My faves were the Black Marlin Porter (5.9 per cent ABV), Smoke Screen Helles (5.4 per cent) and Barmy Ale (10.5 per cent), the strongest beer on the menu. Brewed with apricots and honey, it was thick and rich — a meal in itself. At our next stop, AleSmith Brewing Company, we skipped the tour and headed straight for the bar. This time, Mae started us off with the Extra Pale Ale (5.25 per cent ABV), another mild beer, but a great introductory taster. I started out with the Nut Brown Ale (5 per cent ABV), before venturing to the stronger stuff: Grand Cru (10 per cent ABV), a delicious Belgian-style dark ale; the Wee Heavy (10 per cent ABV), a Scottish-style ale with plenty of malted hops; and the Speedway Stout (12 per cent), a rich imperial stout boasting coffee, chocolate and caramel flavors. I got very excited when I saw a pump handle behind the bar, as I knew it was used to serve cask ales. I have a taste for these beers, which have no carbonation, and are rarely brewed outside of England. Since they weren’t included in the tour price, I paid $4 for a glass of their Anvil ESB (Extra Special Bitter; 5.5 per cent ABV). By the time we were dropped off at our car at the end of the five-hour tour, I was ready for a nap. Fortunately, I was not the designated driver! Related Content: Brewery Tours of San Diego AleSmith Old Numbskull AleSmith Anvil ESB More beer reviews San Diego 72-Hr Vacation You can click on each photo to enlarge. 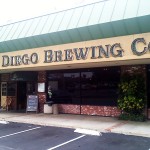 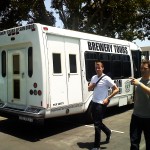 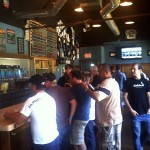 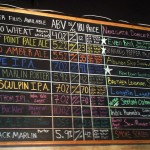 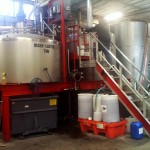 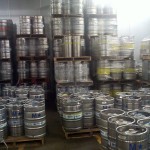 Kegs of Ballast Point beer in the massive refrigeration room 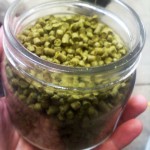 A jar full of hops 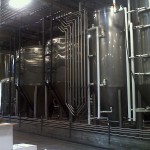 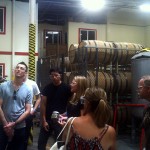 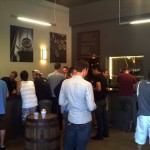 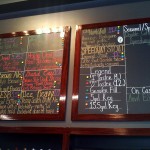 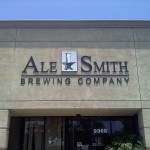