Jack and Miles wining and dining Maya and Terra

by Barnaby Hughes First there was Sideways the novel, then Sideways the movie, and now there is Sideways the play. The world premiere production of Sideways is currently running through July 22 at the Ruskin Group Theatre in Santa Monica, California. The novel’s author and first-time playwright Rex Pickett focuses the stage adaptation on the friendship between Miles and Jack and their wine-soaked wanderings through Santa Barbara County wine country in search of sexual satisfaction and the perfect Pinot Noir. To help with their latter quest, performances are paired with complimentary Pinot Noir tastings, courtesy of wine event company Affairs of the Vine. When I saw the show on Saturday night, May 19, Chris Towt of Dunstan Wines in Sonoma Valley was pouring his 2009 Durell Vineyard Pinot Noir. Each performance and tasting will feature a different winery. Participating wineries include Silver Mountain Vineyards, Carlton Cellars, Coghlan Vineyard, Kenneth Volk Vineyards, Bouchaine Vineyard and Laetitia Vineyard & Winery. Pickett has also published a sequel called Vertical in which Jack and Miles explore the wine country of Oregon. Perhaps one day it will also appear in a movie house and theater near you! For tickets, visit http://ruskingrouptheatre.com/ You can click on each photo to enlarge. Production photos by Agnes Magyari. 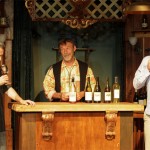 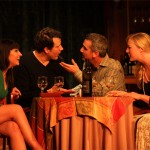 Jack and Miles wining and dining Maya and Terra 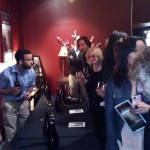 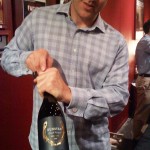