Dining by the Pier

By admin
[youtube id=”8G0wrbvlTII”] by Sophie Gayot Michael Zislis’s latest achievement is The Strand House, the beautiful restaurant overlooking the pier in Manhattan Beach, CA. Before that, he put his energy, and he has quite a lot, into restaurants ROCK’N FISH, Rock & Brews, and Mucho Ultima Mexicana, as well as the Shade Hotel. Not only does he like to invite guests to his restaurants and hotel, but Michael, who is obviously in the hospitality business, also has created a Guest Chef Series at The Strand House where chef Greg Hozinsky cooks and creative exec chef Neal Fraser comes by a few times a month. On August 19, Walter Manzke was the guest chef. The timing was perfect for me, as I had just returned from Tampa before it got too busy with the Republican National Convention, (but maybe I could have sat next to Clint Eastwood, lol). That evening, he successfully composed a new dish: Santa Barbara prawns with white corn and Thai curry, which I feel is the perfect illustration of California cuisine. Watch the video above to see his other dishes, and get a sneak peek in the kitchen to see all three chefs in action. Let us not forget Manzke’s wife Margarita, a pastry chef, who had prepared a summer berry tiramisu, and the wines from PlumpJack and CADE wineries served that evening. The next guest chef will be Michael Cimarusti from Providence on Monday, September 10th. Make your reservation soon, as Providence has been a GAYOT Top 40 Restaurant in the U.S. since 2006. You can click on each photo to enlarge to see dishes from The Strand House restaurant menu. All photos by Sophie Gayot. 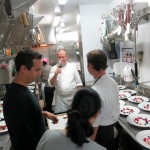 Chef Walter Manzke in the kichen 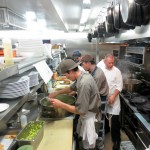 The chefs at work in The Strand House restaurant kitchen 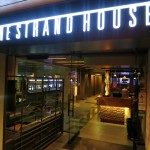