By admin
[youtube id=”zaubYd6Zrdw”] by Sophie Gayot
A week after my first visit to Test Kitchen, I returned there to try dinner. Chef Brian Redzikowski of BondSt at the Thompson hotel in Beverly Hills was cooking, and the place was absolutely packed. I had an 8:15 reservation, but arrived late, and had to wait for my table for quite a while. My repeated requests to start my dinner at the bar were rejected. I kept being told, “No, Chef does not want anybody to be served at the bar. He wants everybody to be seated at a table.”
After having his food, or I should rather say his cuisine, I can easily understand why. He put so much work into creating a smart and inventive 10-course menu, I see why he wanted to make sure that diners would enjoy it under proper conditions. Chef Brian Redzikowski wants to open his own small restaurant in Los Angeles. After working at Le Cirque, Alain Ducasse at the Essex House, Matsuhisa Aspen, and Joël Robuchon in Las Vegas, he wants to fly on his own. With such a pedigree, I thought he could do it, and the dinner I had proved it. If I had to rate it, it would be somewhere around 16 out of 20.

Don’t try to interrupt Redzikowski while he is cooking, as he is completely focused on his task. He also devotes lots of attention to the esthetic of every dish. The visuals are so important to him that he has edible flowers spread all over the kitchen that he enjoys looking at before using them in his creations.

For the occasion, his brother Frank, a chef at Encore in Vegas, came to help him. It was only the second time the siblings have worked together. It looked that they were both happy, and I know the diners were, including myself.
Keep up with the LA dining scene with Los Angeles Restaurant Reviews, News, Culinary Events and Wine Dinners.
You can click on each photo to enlarge. All photos by Sophie Gayot. 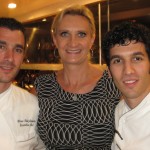 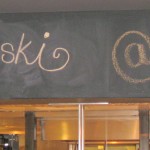 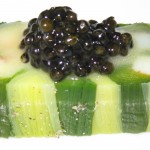 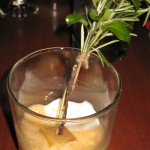 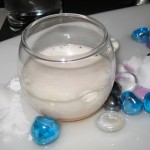 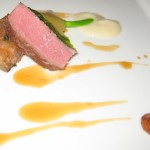 Lamb with chanterelles and onion 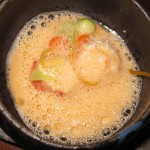 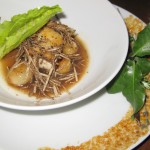 Halibut with black truffles and romaine 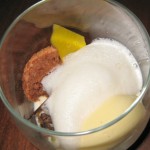 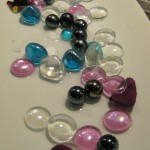 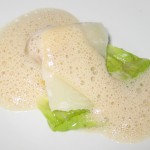 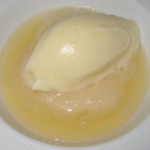 Float of Asahi and acacia honey 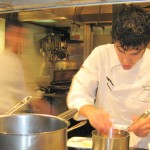 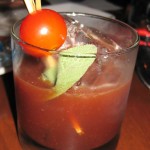 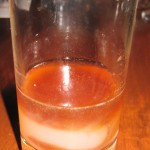