Testing Out the Test Kitchen

By admin
[youtube id=”VZHWrnntcNY”]   by Sophie Gayot     Last night, I parked by chance in front of Test Kitchen for an appointment I had in the West L.A. neighborhood with Hollywood’s favorite publicist Michael Levine. So I decided to pop in to the pop-up restaurant afterwards. I wanted to find out what exactly the restaurant is and to see who was cooking. The chef turned out to be John Sedlar of Rivera.   The restaurant, which will be open for only a few months, welcomes different chefs who want to experiment with new concepts or menus. After that, chef Ricardo Zarate will take over the kitchen fulltime. Be prepared for surprises if you are not familiar with the chef of the day, who may not even be from Los Angeles. Mixologists are also part of the scene, pairing cocktails with the food.   The Test Kitchen has already tested a who’s who of top toques, including Top Chef winner season 6 Michael Voltaggio; Walter Manzke, who is back at the stoves at Saint Amour in Culver City while planning to open his own restaurant; Jordan Kahn, the former pastry chef at Michael Mina’s XIV, who is waiting for building permits to open Red Medicine in Beverly Hills; and Adam Horton of Saddle Peak Lodge, selected by GAYOT.com as one of the Top 5 Rising Chefs in the U.S. in 2008. Next up are Shelley Cooper, formerly of First & Hope, and Brian Redzikowski of BondSt. Consult the Test Kitchen website to find out who’s cooking next. There is a strict reservation policy, so make sure to check the terms and conditions before heading there. I plan on going back for dinner next week. In the meantime, check out my exclusive video interview with owner/partner Brian Saltsburg.   For more chefs and restaurateur interviews, visit our Interviews page.   Click on the photo to enlarge. 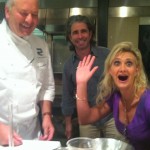