Volte-face from one of the Voltaggio brothers by Alain Gayot   A sports recruiter standing on the sidelines can pick out a young athlete and get a feel for his potential performance and ensuing achievements. Meeting Michael Voltaggio was a bit like that. Instantly, we felt that his performance would deliver continued success in his culinary career. He is a tremendous creative asset for any kitchen, and his food is something you look forward to eating time and again even if not all the dishes are successful one hundred percent of the time.
What is more astonishing is that, unlike his well-trained Top Chef competitor brother Bryan (VOLT Restaurant), he is self-made. Working hard and thinking about the next dish is what’s buzzing in his head and it even moves faster than that: on a given evening, restaurant patrons who arrived later would get a differently tuned rendition of a Voltaggio dish than those who came earlier, as he is constantly creating and improving. He landed in Los Angeles at The Bazaar from the Greenbrier and quickly was swept up by The Langham in, out of all places, Pasadena. The Dining Room has a very old feel and the stuffy room simply does not match his food. Plans for a very modern establishment were drawn and the excitement grew. Then came delays and now Michael flies the coop. We believe location is at the heart of the matter. Sadly, despite his talents, making Pasadena a culinary mecca was not going to happen. Please stay tuned to find out where his modern, sometimes molecular and colorful food will appear again.
The Dining Room restaurant review
Keep coming back to GAYOT.com for the latest in Los Angeles Restaurants News, Los Angeles Culinary Events, Restaurant Reviews and Los Angeles Wine Dinners.
Learn more about molecular gastronomy.
UPDATE: Michael Voltaggio opened ink. and ink.sack in Los Angeles in 2011.
You can click on each photo to enlarge. 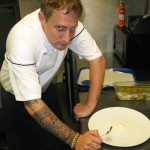 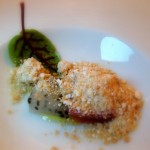 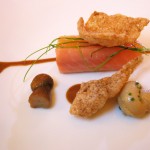 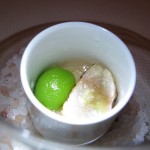 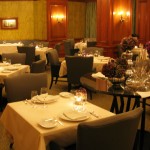 The current dining room is very old and stuffy 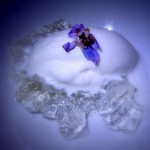 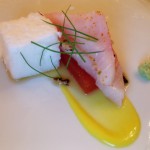 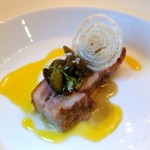