by Sophie Gayot It is that time of the year when Mehdi Eftekari, the general manager of the Four Seasons Hotel Los Angeles at Beverly Hills, organizes an evening to collect toys for the U.S. Marine Corps Reserve Toys for Tots Program. The foundation then distributes them as Christmas gifts to needy children. Last week, I joined hundreds of other guests bearing unwrapped toys to enter the worthwhile event. “This fund-raiser and charity are very personal to me, and I am committed to putting smiles on children’s faces as long as I can. I appreciate all of the support that friends and clients have given to me in order to achieve my goal,” said Eftekari. This year, the Marines had to carry out 2,000 toys as well as $4,000 in donations. Over the seventeen years that Eftekari has been involved, he has been able to collect over 100,000 toys and $300,000 for the charity. Many other hotel workers also did their part. I particularly enjoyed the contributions of hotel executive chef Ashley James and pastry chef Federico Fernandez who worked hard to make the party buffet a success. You can click on each photo to enlarge. All photos by Sophie Gayot © GAYOT.com 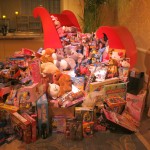 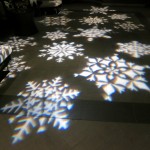 Snow flakes on the way to the ballroom 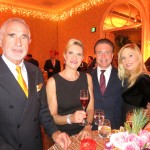 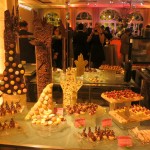 The other side of pastry buffet at Scarpetta brunch 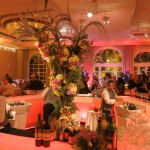 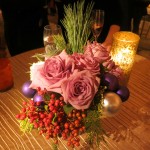 Flowers on the table 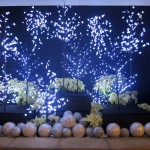 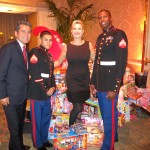