A Whale of a Meal

by Patricia Mack   “Madam, would you care for whale?” the waiter asked. “Whale? Really?” Yes, really, a “duet of whale” actually, beluga and bowhead with Davis Strait shrimp caviar served on a silver charger, as elegantly as at any top-of-the-line restaurant. I hesitated. Adventurous diner that I am, the idea of whale as hors d’oeuvres gave me pause. I knew there’d be exotic fare at the Canadian Arctic Forage Dinner held recently at the James Beard House in New York City, like caribou, musk ox and partridge leg confit. About those I was curious, and while I’m not especially sentimental about animals raised or hunted for food, I’d never considered a whale as dinner. I’d only written checks to organizations working to save them. How strange then to pop a cube of beluga into my mouth. It wasn’t really good, I am happy to report. I would not want to start a craze for whale-eating, but its taste was distinct, briny and almost brackish. I tried the bowhead next, which was chewy and also briny, with a bit better flavor. Both were memorable, but for other reasons than culinary. The whale and many other dishes at this unique dining experience were priceless … literally. Almost none of the main ingredients could ever be purchased. They were gifts from Inuits, the native people who live in the desolate but breathtaking Arctic Circle. Only they are allowed by government regulation to hunt these whales. Every two years, the hunters are picked by lottery and the catch shared among the tribes. These commodities cannot be sold commercially. They can only be given. “This meal is a gift from the people of the Arctic to the people here tonight in New York City,” said skilled forager Steven Cooper, a friend to the tribes who was raised in the Arctic. “These are indeed rare delicacies,” he said. “It’s unusual to find them in Southern Canada, never mind in the U.S.” They were obtained under the most difficult circumstances, and in some cases, the animals were harvested in a brutal environment 200 to 300 degrees above the Arctic Circle, under the most grueling conditions. Another appetizer came round, this time whale bacon and eggs — a familiar dish with unfamiliar ingredients: a sunny side up quail egg, fried crouton, with smoked whale bacon bits with cherry tomato, scallion and chives — oh, and for my part, I added a healthy dash of reverence. This isn’t just food; this is nourishment for the heart, mind and spirit. The symbolism of these foodstuffs was not lost on chef Paul Finkelstein, Food Network Canada personality, school teacher and a close friend of Cooper’s. He prepared the meal based on a menu originally created by Louis Charest, chef to Canada’s Governor General who was also on hand in the kitchen. Finkelstein has traveled to the Arctic and knows the hardships endured to procure these foods. He prepared musk ox quaq (a sort of frozen musk ox tartare) served unadorned — as it is eaten by the hunters who skin the animal after the kill. It is eaten for sustenance during the hunt … it usually freezes in the sub-zero temperatures. “I thought it was important for people here to taste it as it is eaten the Arctic,” said Finkelstein, who brought a crew of twenty of his teenage students to help prepare and serve the extraordinary meal. “There’s more here than ‘food’ — it is a natural meal to engage the spirit and nourish the whole person.” This was not lost on the large and sophisticated gathering of gourmets at the glitzy Beard House Dinner who appreciated the delicacy of dishes such as the Finkelstein’s Arctic Archipelago Cocktail — Davis Strait shrimp with Arctic char liver and foie gras mousse, razor clams and smoked mussels served with wild rice wafer, northern horseradish and sun-dried tomato cocktail sauce. There was also the A Mare Usque Ad Mare — Eastern Canada’s Pangnirtung turbot cooked as tempura and Western Canada’s pickerel topped with whitefish caviar and haida swaqii or herring roe, Tamworth sausage from Ontario, caribou salami, Mipkuzola (kind of an Eskimo prosciutto) served with pickled ramps, toasted brioche spread with elderberry juniper and wild ginger chutney. And there were questions … lots of which from people who will never experience life at twenty degrees below zero. It took a kayak-load of permits and paperwork to bring the coolers of these exotic foods into the U.S., Cooper said. “You should have seen the look on the faces of the U.S. Customs agents when they realized we were packing whale,” Finkelstein said. “But they were great and we got through.” The Arctic Forage Dinner has now been presented at three venues and the “team” hopes that other invitations will follow. “Food is about more than eating,” Finkelstein said. “In this case there is so much to learn and to know about the people from a mysterious and isolated part of the world — and we were able to foster a greater understanding — all by sharing a meal.” Keep coming back to GAYOT.com for more New York Restaurant News, Restaurant Reviews, Culinary Events and New York Wine Dinners. You can click on each photo to enlarge. 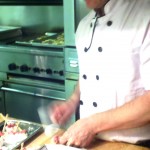 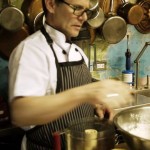 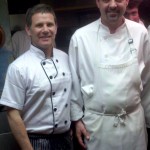 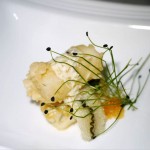 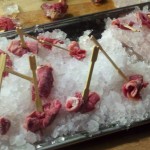