Hordes of international college students descend on Prague every year on a mission to chase the green fairy. But while the absinthe served in this city is particularly potent (and much tastier than many U.S. imports), the true must-try tipple of the Czech Republic is Becherovka.

This herbal tonic has been produced in the city of Carlsbad (Karlovy Vary) since 1807, when it was first mixed up by a pharmacist to soothe stomach ailments. Becherovka gets its curative powers from the purity of the local water and a secretly guarded formula of 30-plus herbs and spices, among which we detect cinnamon, anise and clove — the last notably on the nose. A pleasant, “Christmassy” sweetness is met by equal parts bitter, especially on the back of the palate, where it can linger uncomfortably for those with sensitive taste buds. We particularly liked that Becherovka feels less thick and syrupy than other herbal bitters like Jaegermeister and Ramazotti. This two-century-old liqueur is cleaner, more along the lines of a Fernet Branca or Underberg.

As recommended, we tried it neat and chilled, but preferred the watering-down effect of a couple of ice cubes. In the end, Becherovka is never going to make our list of favorite refreshments, but we could certainly imagine sipping it as a digestif after a hearty meal of knedliky (dumplings) or guláš (goulash). Try it the way it’s served across bars in Europe, by mixing the bitter with lemon juice and tonic water for a “Beton” cocktail. 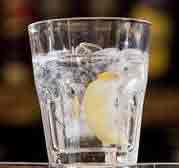