It doesn’t get much tastier than movies about food, so settle in with your favorite gourmet popcorn and get ready to binge-watch GAYOT’s Top 10 Movies for Foodies. From an animated classic to more recent releases, these are the films that will ignite your appetite and perhaps inspire a cooking renaissance in your own home.

Just remember, if you believe the movies, then love is almost always a key ingredient in any successful recipe. And don’t forget to feast your eyes on more top movie recommendations to satiate your cinematic appetite.

The Academy Award-winning movie about a former Parisian chef who livens up a Danish village with her delicious cooking.

When “Babette’s Feast” took home the Academy Award for Best Foreign Language Film in 1988, it came as no surprise — the Danish film directed by Gabriel Axel is a wonder. The first two acts focus on life in a remote village ruled by straight-laced religious zealots. The film takes a fascinating turn in the incredibly lush and sensual third act when Babette (a French refugee and former Parisian chef) surprises villagers with a feast like none they have ever experienced. Mix in unrequited love, personal misfortune and just a soupçon of comedy, and the result is truly a masterpiece of foodie filmmaking.

Two Italian-immigrant brothers, Primo and Secondo, struggle to keep their restaurant in business in “Big Night.”

Take a cast of fantastic actors and place them into a story filled with hope, sadness and a boatload of Italian food, and the result is the yummy “Big Night.” Stanley Tucci co-wrote and co-directed this film (along with Campbell Scott, who also appears) about two Italian-immigrant brothers who come to America in the 1950s to try to make their fortune by opening a restaurant. Tucci stars as Secondo, the younger brother to Tony Shalhoub’s Primo. Primo is a master chef and Secondo is the front-of-house brains, but they can’t compete with Pascal’s, the flashy Italian place right down the street, run by Ian Holm and Isabella Rossellini. As their finances crumble, the brothers go after one “Big Night,” when singer Louis Prima has promised to come and try their food. It’s a wild night filled with romance, disappointment and some of the most gorgeous plates of food you’ll ever see.

Jon Favreau’s vanity piece is one of the best foodie movies we’ve seen in recent years.

Jon Favreau wrote, directed and starred in this delightful comedy about a volatile “Chef” who goes ballistic in the fancy L.A. restaurant where he cooks. That outburst costs him his job and sends him to an old food truck for his salvation — both emotional and financial. It’s a road trip flick that puts the chef into the truck with his young son and an old friend (John Leguizamo) as they cook their way from Miami to Los Angeles, slinging Cuban sandwiches and taking the social media world by storm. Funny, sweet and guaranteed to make you hungry, “Chef” turns out to be a scrumptious treat for movie and food lovers. 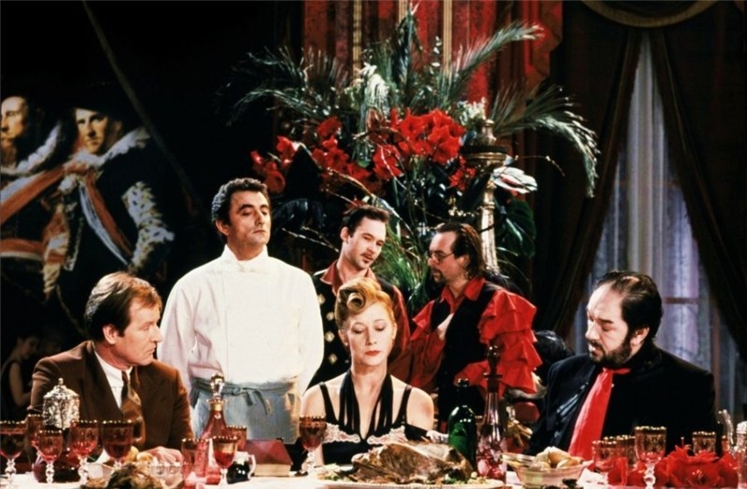 A wife begins an affair with a frequent guest at her husband’s restaurant in The Cook, the Thief, His Wife and Her Lover.

Twisted, sick and tons of fun, Peter Greenaway’s “The Cook, the Thief, His Wife & Her Lover” caused a sensation when it hit theaters in 1989. Starring the super-sensual Helen Mirren as the Wife and Michael Gambon as the Thief — a crime lord and truly despicable person — the movie is centered around the restaurant they own, where the Cook (Richard Bohringer) suffers scolding every night. Enter the Lover (Alan Howard), and the sparks really begin to fly. Wildly inventive with an eye-popping set and costume design, this disturbing and intense film combines haute cuisine, kitchens and sex in ways you may never have imagined. 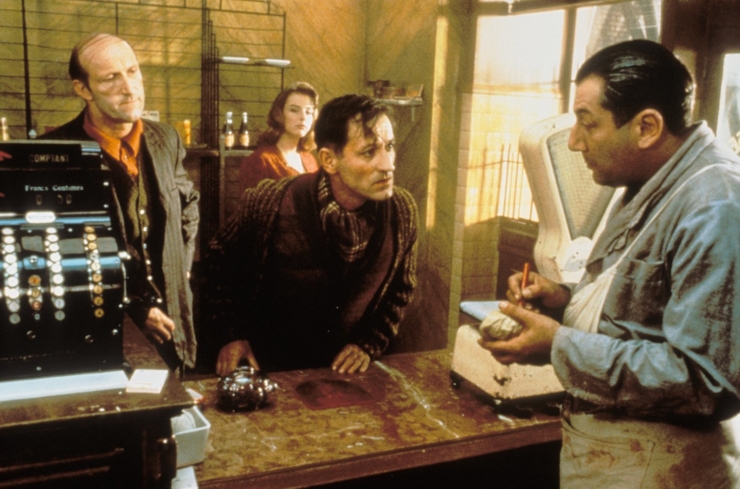 One of the earlier accomplishments of famed Amélie director, Jean-Pierre Jeunet.

Jean-Pierre Jeunet’s brilliant, award-winning black comedy about a post-apocalyptic apartment building that houses a “Delicatessen” signaled great things to come from the first-time writer-director (who later went on to write and direct the wonderful “Amélie” and “A Very Long Engagement”). Teaming with fellow writer-director Marc Caro, Jeunet depicts a twisted world where food is so scarce that a group of very odd people living in a very weird building all depend on the building’s owner — a butcher and the delicatessen manager — for their survival. The film offers circus clowns, vegetarian rebels, suicidal beauties, star-crossed lovers and a surreal sensibility that will have you coming back to this dystopian universe for seconds.

Before Ang Lee won two Oscars for directing “Brokeback Mountain” and “Life of Pi,” before he wowed audiences with “Crouching Tiger, Hidden Dragon,” he wrote and directed “Eat Drink Man Woman,” a very personal story about Chu, a Chinese chef, and his three daughters. Beginning and ending with the massive Sunday dinner that Chu prepares every week, this touching family drama about aging, death and the prickly relationship between old-fashioned fathers and their more modern daughters takes some surprising turns in between those two incredible meals. Told with a delicate and wry touch, “Eat Drink Man Woman” is a beautifully expressed, universal story of family and food that was Oscar-nominated in 1995 for Best Foreign Language Film. Where Indian and French cuisine collide in the most charming way.

Could two cuisines be more different than Indian and French? In this charming comedy directed by Oscar nominee Lasse Hallström (“My Life as a Dog,” “The Cider House Rules”), an Indian family led by a strong-willed patriarch finds their way to a new home in the small town of Saint-Antonin-Noble-Val, France. There they open an Indian restaurant directly across the street from Madame Mallory’s haute French eatery. Amid such different culinary (and cultural) styles, tempers rise and sparks fly between the older and younger generations of chefs. Helen Mirren is grand as the fussy French restaurateur and Manish Dayal is terrific, too, as the son whose Indian-French fusion dishes bring the two worlds together and prove that a love of wonderful food can break down big barriers.

Tita’s emotions infuse her food with remarkable flavors in Like Water for Chocolate.

Food, love and family obligations are constantly intertwined in this epic Mexican tale filled with magical realism, unrequited passion and some of the most mouth-watering images of cooking ever put on screen. Set mostly in the early 20th century on a ranch along the Mexico-Texas border, “Like Water for Chocolate” follows star-crossed lovers Tita and Pedro as they struggle against family tradition, overbearing parents and life’s unexpected vagaries to consummate their love. Fanciful one moment, brutally intense the next, the film is always fascinating — especially during the sensual eating scenes where unfulfilled desires are expressed through food.

It took home the Academy Award for Best Animated Film in 2008 and is truly a foodie’s delight.

Who would believe that an animated movie about a French rodent who becomes a world-class chef would be among the best movies about food ever made? Well, once you realize that “Ratatouille” is a Pixar Animation Studios release it all makes sense. Remy is a little rat who lives for great cuisine, not the scraps his extended family is content with finding in the trash. Very funny circumstances lead him into the kitchen of the 5-star Parisian restaurant Gusteau’s, where he partners with a bumbling busboy and together they rise to greatness. Gorgeous animation, a boldly funny story about rats taking over a gourmet French kitchen and a hero everyone simply has to love make “Ratatouille” a true classic for the whole family.

Based on the book by Roald Dahl, this cult film is your ticket to a flavorful experience akin to chewing on a stick of Three-Course Dinner gum.

“In your wildest dreams, you could not imagine the surprises that await you!” So says Willy Wonka in the original Hollywood take on Roald Dahl’s beloved tale of a young boy named Charlie and his visit to the eponymous confectioner’s magical factory. Dahl wrote the screenplay to this musical version that stars Gene Wilder as Willy, Peter Ostrum as Charlie and Jack Albertson as Charlie’s Grandpa Joe, who joins Charlie in his adventure through the factory. The trip is all made possible by the Golden Ticket they find in a Wonka chocolate bar — and the escapade lives up to every kid’s wildest dreams. Chocolate rivers, gardens made of candy, lickable wallpaper, edible tea cups, Everlasting Gobstoppers… there’s no end to the magical delights. Oh, and it’s all created by small, singing orange creatures called Oompa Loompas. The imagery sticks with you like a sugary candy wrapper, as do the life lessons about being truthful and just saying “no” to selfishness and gluttony.