Gastronomy and Astronomy at L’Astrance in Paris 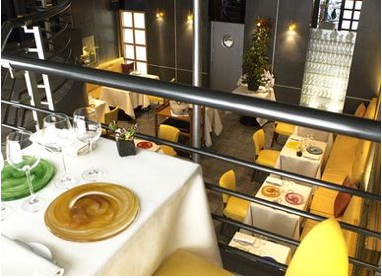 A Short Guide to Deciphering the Stars in Paris

Gastronomes here were taken aback when L’Astrance won three stars in the recent Michelin guide, because it did not meet the usual three-star requirements at all. L’Astrance seats only 25 guests, there’s no silverware, décor is minimal, the size of the kitchen is that of a Manhattan condo and there’s not even a menu.

Pascal Barbot, the young chef who hails from Vichy (near the central mountains where a rare flower by the name of Astrance grows), just follows the stream of his inspiration and offers a “menu surprise” every day. You never know in advance what you are going to eat. That’s a lot of innovations—to say the least—in the usual three-star model.  With all due respect to Pascal Barbot’s unquestionable talent, some whisper that there might be some political meaning buried in the award of this distinction for the restaurant.

Foodies here recall that last year, Alain Senderens created a stir when he returned his three stars to Michelin, arguing that it was not worth spending all that money and exerting all that effort to reach—and even more to keep—the three-star status. He decided very successfully to transform his hieratic and expensive venue into a more informal and affordable restaurant. This slap in the face was a blow to Michelin’s authority, people say. Michelin’s indirect diplomatic response to Senderens’ allegations could very well be the unlikely election of this tiny place, which has no staff, no decorum, no crystal and no silver, and no gilded restrooms, which are said to be the indispensable parameters. This choice of a miniscule operation run by two young and “simpatico” guys is supposed to diplomatically address Senderens’ criticism that you can’t get three stars without a huge investment.  Yes you can, is the new message of Michelin. For this recent edition, and at least for this one example, the rule is: Talent before money.

Michelin has been under fire for the last years, and this could very well be another episode, they say, of an unravelling saga.  Bernard Loiseau’s suicide a few years ago lingers on their minds. In his quest for stars, they argue, this chef perpetually ran after money to magnify his house, because that was the way to please the guide. The possible and much feared loss of a star (as then anticipated by a daily paper in Paris) and the looming risk of bankruptcy could explain, for them, the despair of Loiseau. Of course, nobody will ever know what was on the chef’s mind when he shot himself, but the notion that the guide and the media are part of the tragedy is still anchored in many spirits. Another reason why Michelin—after so many years of unique “dictatorship” only balanced by the surge of GaultMillau for twenty years between 1969 and 1989 (which, alas has gone with the wind)—is investigating new avenues to deal with contemporary realities and maybe also doing their best to limit unwanted and unexpected collateral damage.

Gastronomes also state, and are sorry, that the proclamation of the annual Michelin tally is no longer the big splash it used to be. That’s because all the winners and losers have already been known since the beginning of the year. The public’s attention just wasn’t there when Michelin released the book in late February. All the names had already appeared in France Soir on January 17, 2007 and in Le Figaro the following day.

Michelin says the content is kept secret up to the publishing date with precautions such as no one holding a pen being allowed to participate in the final deliberations. So who leaks the info? Who is the traitor? But is there really a traitor?