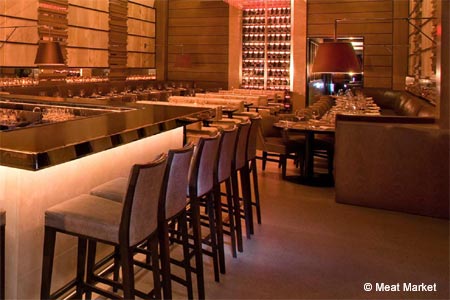 With beef choices ranging from skirt steak to a Wagyu tomahawk rib-eye (and varied steak sauces/butters to match), Meat Market is certainly a serious steakhouse. But it's a non-traditional one in a way that goes beyond the sleek, sexy dcor and beyond surf and turf. Chef Sean Brasel handles seafood skillfully, whether its a cedar paper Scottish salmon with candied jalapeo orange glaze, star anise and cinnamon or sea bass doused in truffle nage and alongside truffle mash. But as the deliberately double-entendre name suggests, the bar scene is also lively and often so packed it's hard to get to the dining tables in back. And drinkers don't go hungry. Perhaps due to many years heading up popular Touch Catering, Brasel's small plates (creative cold crudos, foie gras duo, char-grilled chimichurri oysters) excel. Actually, even Brasel's vegetable sides, such as Gouda tater tots and lobster mashed potatoes, are tasty enough for a satisfying steak-free grazing meal. Wines are picked for pairing; ask about MM's irregular but unusually informed wine dinners.