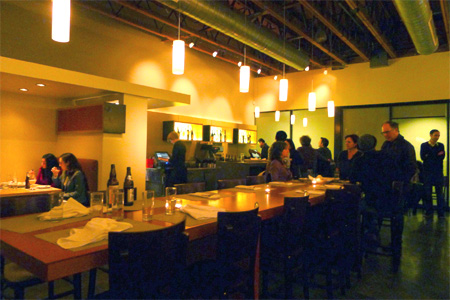 Tucked away in the far corner of a West L.A. mini-mall, Nook Neighborhood Bistro has been pleasing the palates of local diners since 2004. Encompassing two booths and a large communal table, the dimly lit restaurant only seats a couple dozen guests. Chef James Richardson (who's also a co-owner with Jeffrey Stuppler and Brian Frith-Smith) is at the top of his game with his fresh and creative California bistro fare, which has the additional benefit of being a great value. Start your meal with the grilled asparagus salad or a platter of lightly cooked New Zealand mussels in white wine and saffron before venturing to the “big” category, as it's called on the menu. Richardsons Southern heritage is often reflected in Mondays Laundry Day special, which might feature chicken and sausage gumbo served with bread and salad. Other comforting classics include shrimp and grits, the signature burger topped with Gruyre and red onion, and Prime rib-eye with brandy sauted apples and a mushroom demi-glace. Finish off with the chocolate banana bread pudding. On Sundays, a three-course prix-fixe meal is offered for just $20. The wine list is fairly brief, but there's a fine selection of beers. If you'd prefer to bring your own, corkage is free on Mondays and Tuesdays.