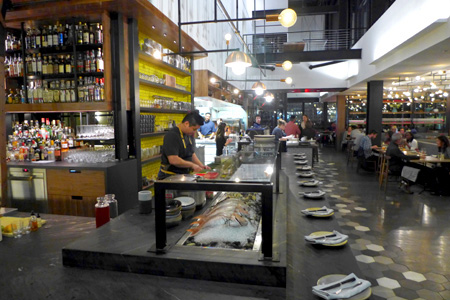 About the restaurant: Otium, a project from Sprout LA restaurant group, is in a freestanding building on the plaza adjacent to The Broad on downtown Los Angeles' Bunker Hill. The restaurant features contemporary American wood-fired fare from chef Timothy Hollingsworth, the former chef de cuisine of The French Laundry. As it is perched at the end of the plaza, you'll have views of Hollywood in the distance, but much closer to your line of sight is the chef's open kitchen, unless you sit on the patio. A loft gives a higher view of things and a look out to the open mezzanine vegetable garden. You may also choose to sit at the raw bar or at the chef's table. A two-story wine tower will fill up with mostly American offerings. Otium in Latin designates a concept of leisure that involves the arts, including those of the table. Get a taste of the offerings at the nearby kiosk Otium On the Go, which is open 10 a.m.-4 p.m. Tues.-Sun.