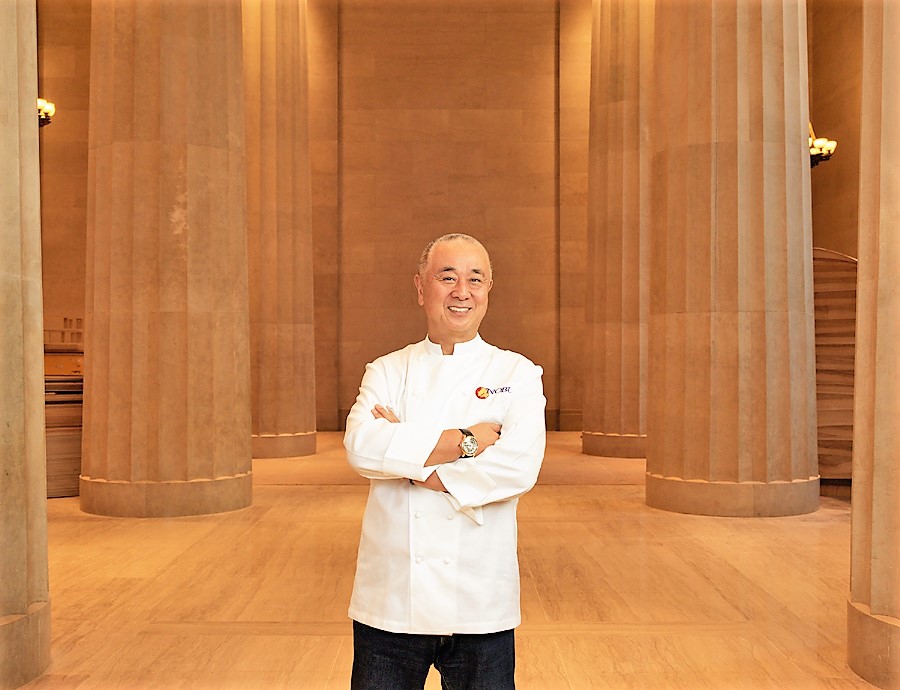 Putting Sushi on the Culinary Map

Many little boys dream of growing up to be professional athletes or firefighters or police officers, but young Nobuyuki Matsuhisa’s ambition was to become a sushi chef. Indeed, he would go on to accomplish that — and much more — but not without enduring setbacks, including a disastrous restaurant fire, along the way.

Nobuyuki Matsuhisa, better known to diners around the world simply as “Nobu,” was born in 1949 in Saitama, located in the Greater Tokyo Area of Japan. Around the age of 11 or 12, he was treated by his older brother to a visit to a sushi restaurant and was instantly enchanted. After high school, he moved to Tokyo and started working at a sushi restaurant called Matsue. For a few years he toiled away washing dishes and cleaning the restaurant until he was promoted to be one of the sushi chefs.

In 1973, at the age of 24, he was presented with the prospect of opening a sushi restaurant in Peru, so he made the move to South America. He started developing what would become his signature fusion style out of necessity, since he didn’t have access to the ingredients he was accustomed to using. After a few years, he left to pursue other opportunities, eventually landing in Anchorage, Alaska. However, his new restaurant suffered a catastrophic fire within just a few months of opening.

Nobu and his family returned to Japan, but not long after accepted an offer to work in a small sushi bar in Los Angeles. Over the next several years he continued to refine his Peruvian-inspired Japanese cuisine and sushi, culminating with striking out on his own again to open Matsuhisa in Beverly Hills in 1987. The restaurant attracted a Hollywood clientele of agents and celebrities, including actor Robert DeNiro, who encouraged him to open a restaurant with him in New York. Eventually, Nobu took him up on this offer, opening Nobu New York in 1994.

Over the next two decades, Nobu and his business partners would grow the dining empire to more than 40 locations across five continents, including branches of Nobu in London, Dubai, South Africa, Moscow, Las Vegas, Hawaii, Los Angeles and Malibu.

The menus at Nobu restaurants present sushi, sashimi, tempura and fusion-forward cold and hot dishes that range from seafood ceviche to Japanese A5 Wagyu beef. The complexity of the yellowtail sashimi with jalapeño is disguised by its simplicity: yellowtail, yuzu, chilies and cilantro combine for a powerful bite.

Meanwhile, the black cod from Nobu is famous thanks to its saikyo miso sauce prepared with white miso, mirin and sugar. Cooked to a delicate tenderness, this buttery, caramelized fish is the epitome of umami flavors.

Recently, Nobu’s influence in the hospitality industry has gone beyond restaurants and into hotels, starting with Nobu Hotel Caesars Palace in Las Vegas in 2013. This luxury boutique brand has also multiplied rapidly, with several properties popping up in London, Miami, Spain and Mexico and more slated to open in Chicago, Toronto, Brazil, Barcelona and beyond.

Throughout his career, chef/restaurateur Nobu Matsuhisa has admirably demonstrated creativity and innovation in his cuisine, as well as strength and tenacity in overcoming adversity. For more insight into his life, read his 2017 book, Nobu: A Memoir. If you want to try recreating some of his dishes at home, check out his cookbooks, including Nobu: The Cookbook, Nobu Miami: The Party Cookbook, Nobu the Sushi Book, Nobu’s Vegetarian Cookbook, Nobu West and Nobu Now.

Tags: Restaurateur of the Year