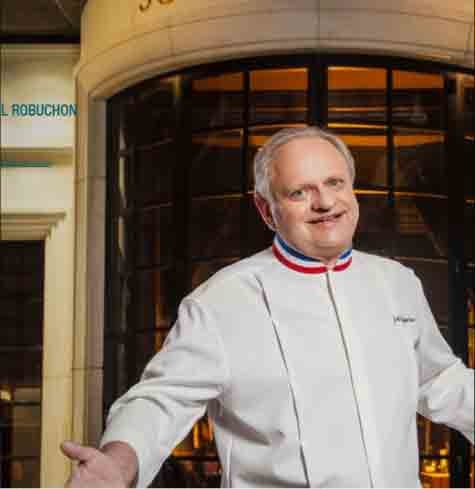 Chef Joël Robuchon will be missed

Named “Cook of the Century” in 1990 by GaultMillau/GAYOT, there will be only one Joël Robuchon in the world forever. After inspiring so many who now lead haute gastronomy establishments, he left us on August 6, 2018.

Read what some of them have to say:

– Christophe De Lellis, executive chef at Joël Robuchon Restaurant, Las Vegas
“Mr. Robuchon was a mentor for all of us. He is the greatest and his cuisine will remain immortal and untarnished. We are going to miss you, Mr. Robuchon… Condolences to the family.”

– François Bénot, executive pastry chef world, groupe Joël Robuchon
“Through the 15 Ateliers and restaurants we had the great pleasure to open in the four corners of the planet, Mr. Robuchon made me discover the world. He was an extraordinary and exceptional teammate. He had full confidence in me about the ‘sweet’ Joël Robuchon’s universe. Thank you, Monsieur.”

– Claude Le Tohic, former executive chef at Joël Robuchon Restaurant, Las Vegas
“Words cannot even begin to express how deeply saddened I am by the news of Chef Joël Robuchon’s passing. He was a mentor and a dear friend. He will forever hold a place in our hearts and his culinary legacy will live on. My deepest condolences to the family.”

– Christophe Bellanca, executive chef at L’Atelier de Joël Robuchon, New York City
“Such a sad day for us. Not everyone has the pleasure to work with and beside their idol — me, I’ve been very fortunate. Mr. Robuchon has always been very kind and supportive to me. He spent his life collecting stars and now he lives among them.”

– Patrick Méhu, front desk manager Ateliers restaurants, Paris
“Thirteen years ago, Mr. Robuchon asked me to join his team to be the person in charge of the front desk for Parisian Atelier restaurants. What an honor. Thank you, Monsieur.”

– Steve Benjamin, former executive chef at L’Atelier de Joël Robuchon, Las Vegas
“I still do not realize it! I am still thinking that Mr. Robuchon is invincible.”

– Chef Daniel Boulud
“Since he began, Joël Robuchon had been a great chef who became an excellent one. During 40 years his cuisine did not cease to be creative, refined, powerful, distinctive, especially with balanced flavors, delicate with textures and beautiful presentation. His reign as “Chef du Siècle” (Cook of the Century) was a major contribution to the glory and pride of French cuisine! His publications will remind all present and future chefs of his long path in France and throughout the world.”

– Chef Jean-Georges Vongerichten
“What a sad moment for all of us in the hospitality world! He was a friend and a perfectionist on every level!”

– Chef Michael Cimarusti, chef/owner Providence, Los Angeles
“Joël Robuchon has been a hero of mine ever since I purchased his book Simply French in the early ‘90s. This book changed the way I think about food and the craft of cooking. Chef visited Providence back in 2010. To cook for a chef of his stature was daunting, to say the least. When Chef visited the kitchen after the meal, he let me know that he truly loved the Black Sea Bass with Matsutake that we had cooked for him. We still serve that dish every year when Matsutake season comes around and we’ll never stop serving it.”

– Chef Josiah Citrin, chef/owner Mélisse, Santa Monica, CA
“Thank you, M. Robuchon for all that you gave the culinary world, and for showing us how far we can go in our attention to detail.”

– Guillaume Gomez, chef des cuisines, Palais de l’Élysée, Paris
“I am so terribly sad to learn of the disappearance of this immense chef. The best technician French cuisine ever had. An example for generations of chefs. I will keep memories of a generous man who, when in 2004 I entered the family of ‘Les Meilleurs Ouvriers de France,’ welcomed me as a friend, a brother.”

– Christian Vabret, Président de la Confédération Européenne de la Boulangerie-Pâtisserie, France
“I met Joël Robuchon on several occasions. Every time, we discussed with great pleasure the importance of bread in the world of culinary. Joël Robuchon made a point, in each of his restaurants throughout the world, to highlight French bread. In Shanghai, next to his restaurant, located on the largest avenue, he opened a bakery/patisserie. A fervent defender of French gastronomy left us.”

– Sébastien Silvestri, chief operating officer Disruptive Group, Division of sbe, Los Angeles
“He was an extraordinary man, and one of the greatest Chefs the world has ever seen. It is very sad for the French community to see him go. He leaves behind a legacy. I will never forget the moments we shared and will cherish his philosophies forever. He was the Chef of the century.”

– David Féau, former executive chef Wally’s Beverly Hills
“Joël Robuchon was “Le Maître des Maîtres.” Simplicity and perfection were his words as he was one of the most inspirational chefs of our time. Five decades of culinary perfection. His culinary chef world was always extended to farmers and growers, as he always said that without them our craft wouldn’t be the same. He will remain an idol forever. Sadly, respect and thank you.”

– Alice M. Hart, food stylist, Food For Film Stylists® Los Angeles
“Chef Joël Robuchon was a dear friend, mentor and culinary genius. A humble man whose passion and quest for excellence inspired me to reach higher, assist others and enjoy life’s culinary adventures to the fullest. I will miss him deeply, but his legacy will live on.”

– Roy Ner, Nour restaurant, Sydney
“What a loss…. He was an idol for me as a chef growing up in the kitchen ranks. His saying, ‘There is no such thing as the perfect meal,’ is something that I carry with me every day as a chef.”

– Gilles Epié, former corporate executive chef Juvia, Miami
“He was fair, strict but so professional. Even when we’re doing TV shows together. I just loved him.”

– Bruno Serato, chef/owner The Anaheim White House, Anaheim, CA
“The best experience of dining in my life was at Joël Robuchon in Las Vegas… A legend that will never die.”

– Akira Hirose, chef/owner Maison Akira, Pasadena, CA
“We will all miss him. He said a plate of a meal is never perfect. The important thing is that we try to make it close to perfect.”

– Brandon Kida, executive chef Hinoki & the Bird, Los Angeles
“I only met him once in NYC when I had just started my career. I staged at his NYC restaurant. He was extremely kind and took the time to teach me even as a stage.”