A Tribute to Chef Joël Robuchon 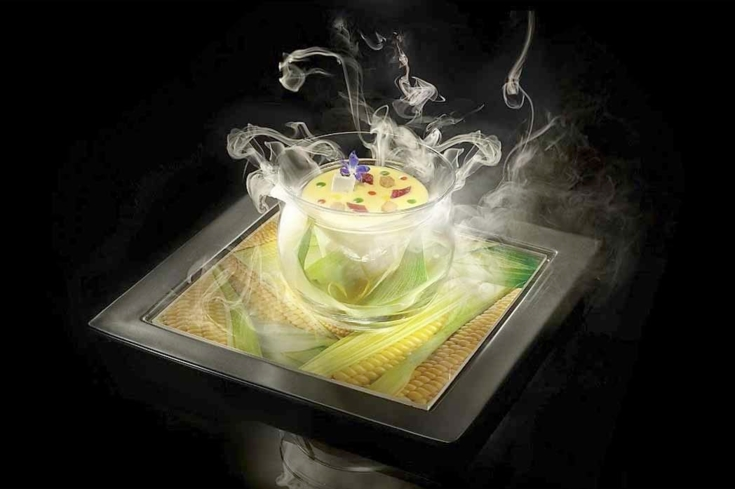 Glorifying the Product, and Simplifying the Haute Cuisine: Joël Robuchon Brought the Truth to our Plates

A cuisinier and a gentleman. Under Joël Robuchon’s discretion, simplicity and modesty lay his immense talent. Maybe it was because this son of a mason and a cleaning woman had learned at the Seminary the merits of humility. He also acquired a strong culture including Latin, which helped him to construct his life his way. Starting at the bottom, he realized he needed to learn much more. He was accepted among les Compagnons du Tour de France, a blue-collar organization dating from the 19th century that organized internships in different places around France where beginners would learn the trade and the skill of seasoned artisans. Its philosophy was that “the man had to accomplish himself through the quality of his work.” Robuchon adopted this line and worked hard to apply it and accomplish himself. He won the title of “Meilleur Ouvrier de France,” a very coveted recognition of the talent of the recipient.

According to J.C. Ribaut, our Paris correspondent who was close to him, the detonator that really propelled his career, this instant of inspiration (1978) was a basket of just-picked morels presented by his grandmother. Seduced by the vision of the mushrooms gleaming with morning dew, he immediately concocted what dish he could do with them, like a painter admiring a landscape prepares its representation on a canvas. From then, Robuchon climbed rapidly the ladder to the top. In the 1980s as one of the top chefs of la Nouvelle Cuisine, Robuchon stunned and seduced the Parisians with Jamin and its famous purée. After three years of success, we (GaultMillau/Gayot) decided that for his accomplishments he was the Cuisinier of the Year (1985). His influence on French and International cuisine justified his laurels as Cuisinier of the Century (1990). Surprisingly, he retired in 1996. However, he returned to the restaurant world in 2003 and then built a worldwide Robuchon empire.

What did Robuchon bring to the cuisine? To use his own words: “The best is often the simplest.” This cuisine reflected his own personality. He simplified many dishes, focusing on the product, getting rid of fussy preparations, exalting the ingredient, whatever it was, to reach its perfection without any trick. He was the pioneer of a lightened, healthier cuisine. Though discreet as he was himself, his imprint on contemporary cooks has influenced and educated cuisines all over the world. He brought the truth to our plates…

> Read more tributes to Joël Robuchon from his peers.