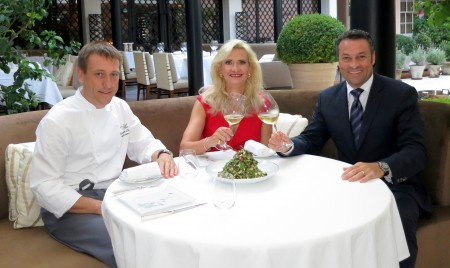 The Original Nancy Reagan “Chopped” Salad is back at the Hotel Bel-Air! Introduced in the 80s as the “Spa Salad”, it became Mrs. Reagan’s favorite lunch item, and was named after her circa 2000. The former first lady still comes once a month.

But the classic dish disappeared from the menu when the renovated hotel reopened in November 2011. It has been revisited by Wolfgang Puck’s team, and tastes better than ever. Composed of finely chopped romaine, baby gem lettuce, diced tomato, grilled Jidori chicken, diced turkey bacon, avocado and Point Reyes blue cheese tossed in homemade lemon vinaigrette dressing, it is a full meal by itself. It’s not just for ladies who lunch; even businessmen order it!

More lunch menu news: the return of Thai style chicken salad and the Japanese BBQ salmon salad, and the arrival of signature pizza and sandwiches.