The History of Food Trucks 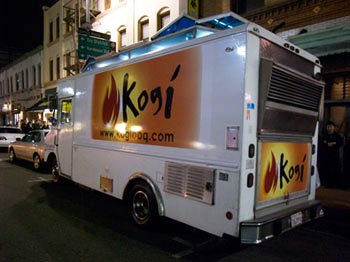 Food on the Move

Food trucks, especially of the gourmet variety, have become a recent fixture on the gastronomic landscape of LA. While neophyte hipsters may think that Kogi invented the taco truck, we can really trace it back to both Mexico and the Western “chuck wagons” that stretched from Texas to California in the 1860s.

Cultural historian Cyrus Farivar notes, “Given their origins in Mexico, a dash of Americanizations and a kitchen on wheels, taco trucks are the perfect trans-cultural metaphor for California. While taco trucks exist in other parts of the country, their presence originated (here). Raul Martinez is believed to have opened the first taco truck—converting an ice cream truck—outside of an East Los Angeles bar in 1974. He went from $70 in sales that first night to controlling a small empire of 10 King Taco restaurants and trucks around Southern California.”

Thus, today’s ubiquitous “taco truck”—also known as a “lonchera” was born. As a blue-collar staple of construction sites they gradually gained culinary cachet amongst a small handful of food critics. As cultural fusions began to spawn, they became a full-blown obsession for the new Twitter generation. While a fleet of authentic Mexican trucks paved the way, recent LA history can look back to Roy Choi’s Kogi BBQ truck as the first “fusion” food truck, bursting onto the scene in 2008 with the force of a culinary rave party where foodies got high on Korean-Mexican short-rib tacos instead of hallucinogenic drugs. Two-hour lines were common.

With the floodgates open, a gourmet food truck avalanche followed, with Indian (India Jones, Dosa), Vietnamese (Nom Nom, Phamished), and even Japanese-Peruvian fusion (Lomo Arigato) representing. Star chefs from upscale venues brought out sophisticated high-end trucks like Worldfare and the Border Grill truck. There are trucks for cupcakes, grass-fed sliders, hot dogs, and ice cream made with mascarpone and balsamic fig. If there’s a niche, most likely there’s a truck for it. Meanwhile, dozens of traditional Mexican taco trucks continue to dish up regional tacos and burritos to all walks of life in an array of neighborhoods, and perhaps they have even benefited from the recent popularity of the taco truck craze.

Twitter and the iPhone changed the paradigm of how, when and where we eat in a subtle but seismic way, allowing free advertising to stream to thousands of hungry fans, who then turned others on to their favorite truck in mere seconds. The election of Barack Obama and the triumph of the food truck culture across Los Angeles, if not America, are not unrelated as new media phenomena. There’s also perhaps the appeal of a new democratic way to dine, a call to spontaneity, the cachet of being part of a culinary cognoscenti that joins folks socially in a new and interesting way. Some love the stalking, the thrill of the chase. Others like the serendipity of finding their favorite truck as they drive by, or parked outside their office. And in these times of recession, the price is oh so right. Food trucks are also now popular for events from street fairs to private parties. We might call the movement a “food happening”—or maybe we’re just joining most of the rest of the world that has been enjoying street food from vendors, night markets and mobile carts for centuries.