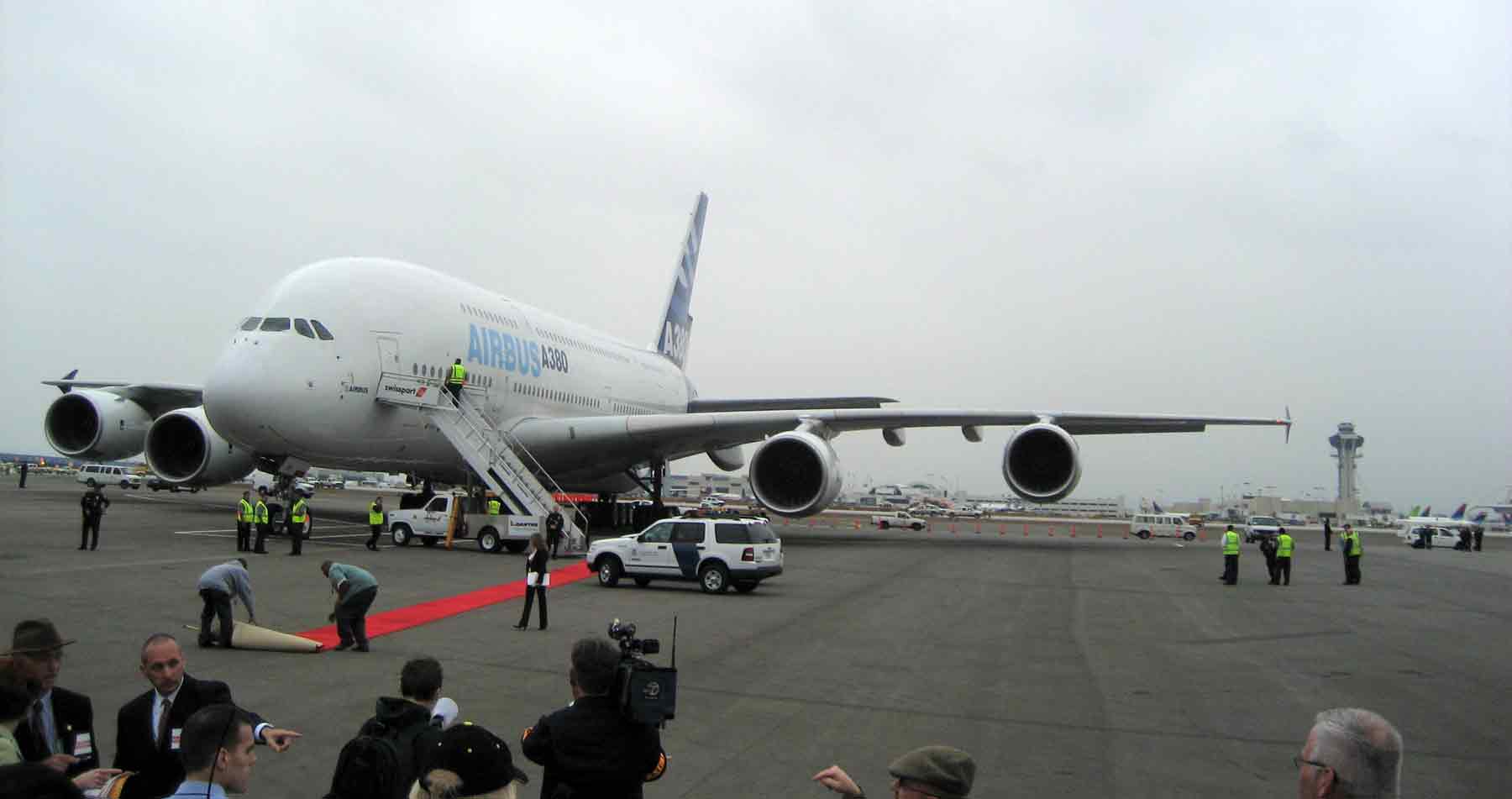 NOTE FROM THE EDITOR: April 27, 2020. To mark the 15th anniversary of the first-ever lift-off from the ground of the gigantic Airbus A380, we are bringing memories of when the first one landed at LAX for its U.S. homologation.

The red carpet was deployed at Los Angeles International Airport where history was made today, when the A380 made its first technical voyage to the United States. The plane was scheduled to land in New York only, but Los Angeles mayor Antonio R. Villaraigosa fought hard in order to welcome the double-decker in the City of Angels. He greeted the flight crew along with Airbus chairman Allan McArtor and Wally Mariani, senior executive vice president of Qantas for the Americas and Pacific, since the company will be the first airline to fly into LAX with the A380. The two planes touched down on U.S. ground almost simultaneously, finding snow on the east coast, and fog on the west.

Loving aviation, I was lucky to attend, with my son, the inaugural landing. Here are très exclusive photos and videos of the technical version of the A380 that I was able to capture during our private tour.

The Airbus A380 will not only revolutionize the world of passenger air transit, but it will also change airports themselves. LAX will be spending $121 million on construction and improvements of its runways, taxiways, boarding gates and other infrastructures to accommodate the airplane’s large dimensions and increased passenger capacity — even strengthening the Sepulveda tunnel. Moving over 500 people off a plane will be no small task, and other airports planning to offer the services of the Airbus will have to adapt in a similar manner. The project has been appropriately named NLA, New Large Aircraft, unless Angelino officials are playing with the letter L and the letter A. We are happy to report that these construction projects will also improve the airport’s safety and efficiency.

The particular aircraft which landed at LAX, directly arriving from Toulouse, France, is a technical one, only equipped with water tanks to simulate the weight of the passengers and electronics, while the one in New York carried passengers. During its 34-hour stay in California, the 8-story high flying machine will be testing LAX equipment and services in regards to its needs.

Mayor Villaraigosa described the plane as the future of air transportation: “We are celebrating the take-off of a greener, cleaner future for air travel.” McArtor confirmed that the plane is environmentally friendly: “It has far less emissions than other airplanes. It burns less fuel and it is substantially quieter on both landing, and approach.” Test pilot Claude Lelaie discussed at length with Eric Garcetti, the Los Angeles City Council President, and assured him that “It is easier [to fly] than a small airplane,” while second test pilot Philippe Perrin, also an astronaut, says that he loves flying the biggest passenger plane.

It seems that the A380 is the 21st century solution to air traffic growth.