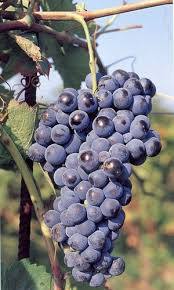 Aglianico is a grape varietal grown in Southern Italy, mostly in Campania and Basilicata. Most experts consider Aglianico to be one of Italy’s “noble” varieties, alongside Sangiovese and Nebbiolo.

Most people will tell you that Aglianico is a bastardization of “Hellenico,” and is a reference to the grape’s Greek origins. This myth has recently been demolished on two fronts. Linguists do not see any link between the words Aglianico and Hellenico. Geneticists do not see any link between the grape Aglianico and the grapes of Greece. The best evidence suggests that Aglianico is indigenous to southern Italy, and we don’t know how it got its name.

Aglianico has thick skins and naturally high acidity, which gives the wines tremendous structure. The combination is perfect for long growing seasons, often at high altitude, allowing the acidity to soften while the structural components of the grape develop full ripeness. The thick skins also help protect the grape from botrytis, which tends to develop late in the season.

Aglianico can taste a lot like Nebbiolo. Both are grapes that can produce fairly high alcohols but retain balance and freshness. They both have alluring aromas that evoke roses, other red flowers, and even porcini mushrooms. Aglianico often has the same kind of red fruits that you find in Nebbiolo (such as red cherry), but it is also more likely to have blacker fruits. Aglianico does not tend to have the herbaceous notes that you often find in Nebbiolo, but instead veers towards spice, coffee, cinnamon, and the like. As Nebbiolo, they produce wines of high acidity and fine tannins, though the tannins in Aglianico tend to be a touch grainier. It is easy to mistake an Aglianico for a Nebbiolo in a blind tasting, though after the reveal you will usually notice the difference.

Aglianico typically is grown on volcanic soils or steep mountain sites in Southern Italy. The world’s best examples come from these three DOCs: Taurasi and Taburno, in Campania, and Vulture, in Basilicata. You will often find it in other regions of Southern Italy, but with less frequency and often in a blend with other grapes. In Puglia, for example, Aglianico is blended with Primitivo, an “easy” grape that softens the severity of Aglianico.

There are experiments with growing Aglianico in other parts of the world as well. This has occurred mostly in Australia, but there are also promising experiments in New Mexico and Texas. Because of its unique physical properties and excellent resistance, Aglianico may be just the right grape for certain extreme conditions where grape cultivation doesn’t otherwise seem possible. It might be a generation or more before consumers can really start to enjoy the benefits of these early experiments.