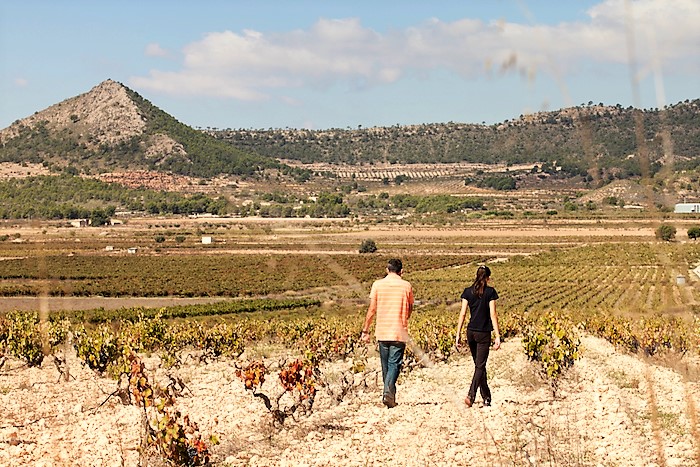 La Mancha is a region in the center of Spain, geographically known as Castilla-La Mancha. La Mancha and the western region of Extremadura belong to the huge plateau landscape Meseta. La Mancha became famous mainly through the Spanish writer Miguel de Cervantes (1547-1616) and his celebrated novel “Don Quixote de la Mancha.” In the plain with the numerous typical windmills, there are extreme climatic conditions with frosty winters and very dry, hot summers. The Moorish name “Manxa” (parched land) describes this very aptly. On average, there are more than eight hours of sunshine a day and rainfall is very low. The soil is mostly reddish brown sand and loam with minor limestone islands. The vineyards in this vast area account for 1 million acres, about half of Spain’s total vineyard area, making it clearly the largest wine-growing area in the world by far.

The appellation of La Mancha, named after the region, covers only part of the huge area, but is still by far the largest of Spain, with around 500,000 acres of vines. Other independent appellations in the region are Almansa, Manchuela, Méntrida, Mondéjar, Ribera del Jűcar, Uclés and Valdepeňas.

La Mancha extends below Madrid almost 300 miles deep into the south to the border of Andalusia. More than three quarters of the vineyards are planted with the white grape varietal Airén. It was used massively after the phylloxera disaster, because it is ideally suited for the hot and dry climate (which is why fungal diseases are almost non-existent in the area). Other white wine varietals are Pardilla, Viura, Sauvignon Blanc and Chardonnay. The most important red wine varietal is Tempranillo (Cencibel); others are Garnacha Tinta, Moravia Agria, Cabernet Sauvignon, Merlot and Syrah.

Bodegas Volver was founded in 2004 by Rafael Canizares, an enologist and viticulturist from his family tradition of four generations. Their objectives are based on the repositioning of quality Spanish wines and recovering old indigenous vineyards which, either through low production or lack of generational succession, had been lost. Their most prized asset is their heritage of vines between 30 and 90 years old, indigenous varietals cultivated in a sustainable way with minimal intervention.

The best Tempranillo grapes are selected in the “Finca Los Juncares,” a vineyard of 70 acres planted in 1957. It is situated at an altitude of 2,000 feet and is composed of extremely sandy soil mixed with small pieces of limestone and red clay.

The grapes are picked by hand and transported in small crates to prevent damage to the fruit. Malolactic fermentation happens in new French oak barrels followed by barrel aging for 15 months. The wine is then bottled without filtering.

The wine has an intense purple color. It delivers aromas of ripe plums, blackcurrants, black cherries, sweet exotic spices, licorice and hints of tobacco. It is juicy on the palate with flavors of ripe red stone fruit and blackberries, full-bodied with ripe tannins and finishes with good length.