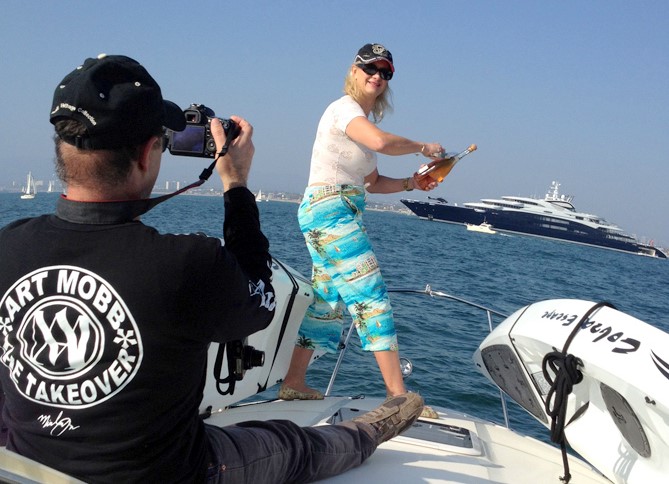 Yesterday was Oscar day. Even though, the biggest night in Hollywood had not yet started, I decided to celebrate the winners while cruising on the Pacific Ocean.

There was only one way to do it for me: sabraging a bottle of Champagne with a backdrop that was worthy of the stars walking the red carpet. Yury Scheffler, the Russian vodka tycoon (Stolichnaya and Moskovskaya, among others), made it easy for me: his 134-meters (440-foot) yacht, Serene, was anchored in Santa Monica Bay.

With a bottle of Champagne Besserat de Bellefon, Cuvée des Moines Brut Rosé, in one hand, a sword in the other, the waves affecting my balance and the wind threatening to take my hat (a baseball cap from the Fairmont Monte-Carlo from my son Alexandre that I did not want to lose), it was the most difficult sabraging I have done so far, but it was successful.

As Academy Award winners spend their time on stage giving thanks, I have to thank the men who made these pictures possible: my friend MB Abram and his son Michael for the boat escape, my father André who was in charge of handing me the saber in the swell, my brother Alain for taking the photos, and my son for making sure that my face was not going to get sunburned!