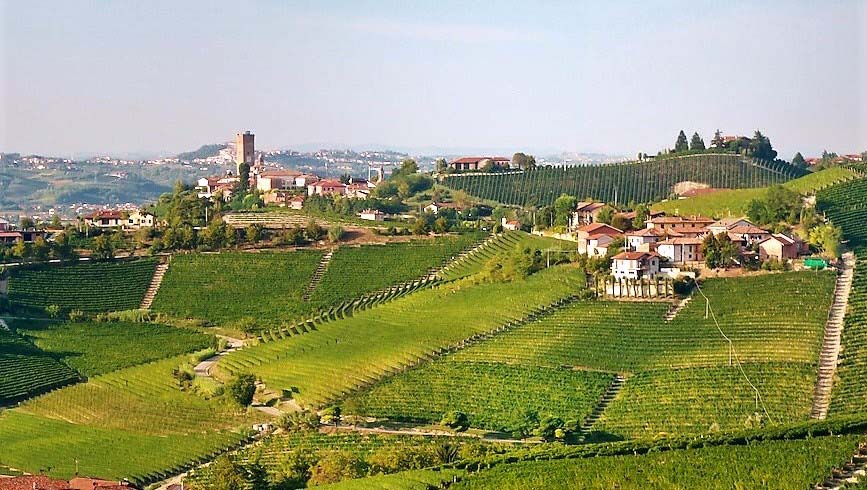 > ABOUT THE BARBERA GRAPE VARIETAL
Barbera is a very popular red grape varietal in Piedmont, and commercially the most important in the region. However, it is more recent than other Piedmontese varietals. There is practically no trace of it in ancient texts; the first mentions of the vine date from around 1800. This leads to two assumptions: firstly, that the Barbera results from a relatively recent natural cross, and, secondly, that it probably has not seen the light of day in Piedmont. In the years to come, DNA studies carried out on the grape varietal will undoubtedly provide more information on this subject.

To define the taste of Barbera, a comparison with Nebbiolo is essential. Barbera is characterized by a usually deep color, significant acidity and moderate tannins, while Nebbiolo is the opposite on these three points. Barbera is presumably feminine due to its seductive fruitiness, as well as its shimmering acidity. These qualities, its light tannin content and its dark color give it the ability to shine even when the production is high. It can be defined as the Merlot of Italy.

For some time, some producers have been modifying the typical Barbera style by using certain winemaking techniques. Until the 1980s, yields of Barbera remained relatively high and fermentation or aging never took place in wooden barrels. The wines were rather light and fruity. Giacomo Bologna, from Domaine Braida, was the first to produce concentrated Barbera, with lots of very ripe fruit and aging in French barrels. His example was followed, and currently more and more Barbera wines are powerful and deep, with international allure.

The prices are also very varied, ranging from small simple wines at around $8 a bottle to sophisticated wines at more than $60 a bottle. The main appellations for Barbera are DOCG Barbera d’Asti, created in 2008, DOCG Barbera d’Alba, which is to the west of the former, and in 2014 another one was added – Nizza DOCG.

> THE WINERY
Since 1956, Michele Chiarlo has been vinifying the essence of Piedmont, loving and developing one of the most incredible wine regions in the world. There are 265 acres of vineyards between Langhe, Nizza Monferrato and Gavi. These crus respect both ecological criteria and the expression of their terroir.

Michele Chiarlo has not abandoned his philosophy. Rigorous selection of the best grapes from only the most reputable growers in the most favored vineyard areas and longer aging in barrel and then in bottle prior to release were measures he adopted before the DOC laws. He is also credited with being one of the first producers to introduce malolactic fermentation to Italy, thereby achieving wines of greater stability, lower acidity and easier accessibility in their youth.

The wine shows a bright ruby color and a bouquet of fresh ripe berries, flower blossom and a hint of cedar box. The palate is very balanced and long with plenty of fruit, well-rounded tannins and juicy acidity.