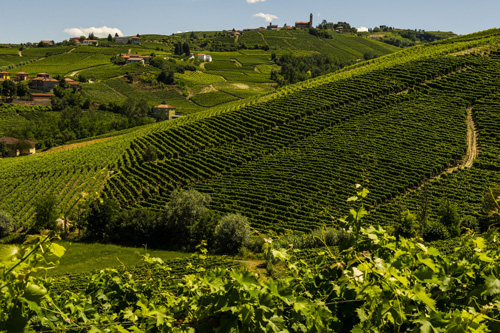 The Moscato Bianco grape, from which Moscato d’Asti and a number of other wines are made, has been cultivated for centuries in the Piedmont region, marking it out as one of the oldest grapes in the Italian wine industry, and certainly one of the most revered in the entire Piedmont region.

However, by contrast, the Moscato d’Asti is actually a fairly new wine, especially when considering the age of the grape. While the wine itself had often been made by the producer, using the frizzante style, in general it was kept back for the producers themselves to enjoy, rather than being made available for the general public. As such, it had a minor reputation as a winemaker’s wine, rather than one that would be commercially viable for a number of years. That all started to change as the 19th century drew to a close, and by the 1870s, Moscato d’Asti had started to become something of a regular fixture in stores and households.

The wine itself stands out from the crowd because of its low alcohol content, which some may argue sets limits on its place in the pantheon of great Italian wines. Often measuring in with approximately 5 percent alcohol content, compared to the 12-14 percent of most other Italian wines, this is a wine that is made for easy drinking at any time of day. That is what led to its popularity for winemakers, before the wine started doing well commercially, as the low alcohol content meant that it was a wine that could be consumed by workers during lunch, without impairing their abilities to do their jobs effectively.

During this time, and through into the modern era, the wine also became a regular fixture of the long, multicourse meals that are something of a tradition in the Piedmont region. It would be used as a digestif, which meant the wine would cleanse the palate between courses, before a more heavy or suitable wine was used for the meal itself. However, it did serve a purpose in these meals beyond palate cleansing, as many would also use it to prepare the palate for the sweetness of a dessert, which is what has led to the wine developing a reputation as a dessert wine into the modern era.

Today, the wine has the strict regulations that you would expect from one of the true Italian classics. Moscato d’Asti is by law a low alcohol wine, which results in the fermentation process being halted partway through so no more alcohol is generated. This leaves behind a lot of the natural sugars that contribute to the sweet taste that the wine has become famous for.

It also differs from other sparkling whites, notably Champagne, in that there is no secondary fermentation that occurs in the bottle. While this would be unavoidable using traditional techniques, a Moscato d’Asti will undergo a specialized filtration process before it is bottled, preventing additional fermentation while also giving the wine its characteristic golden glow, which has proven so appealing to people throughout the years. What’s left behind is an indelibly sweet and simple wine that has been gaining popularity in recent years.

Saracco Moscato is always the first wine of the vintage to arrive into the market, released in November of the same year. It is harvested in late August, vinified in stainless steel and is ready for bottling a few months later. Paolo Saracco bottles weekly so the consumer is always getting the freshest wine. While other producers in the area make Moscato, they are primarily red wine focused and Moscato is a very small segment of their overall production. Paolo is 100% dedicated to making Moscato and has earned the following of consumers worldwide. And, if you can hold on to a bottle for your cellar, it ages beautifully –– contrary to common beliefs. He is well known for doing vertical trade tastings of his Moscatos and everyone is always blown away.

The grapes for this wine are gently pressed and the juice is held at cold temperature. The fermentation takes place in special pressurized tanks. After approximately one week of fermentation the wine is chilled down which stops the fermentation. The wine then goes through sterile filtration and is bottled cold.

The wine shows a light golden color with fine bubbles. The nose unfolds aromas of peach, apricot, lemon peel and white flowers. The taste shows a good balance between acidity and sweetness with a long flavorful persistence.

Suggested food pairings: Excellent as an aperitif or afternoon refreshment and also pairs well with desserts.