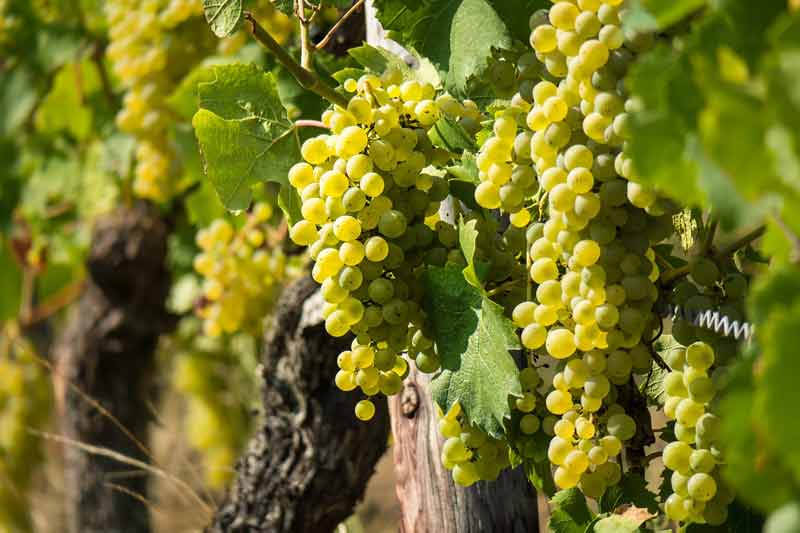 Sauvignon Blanc is a yellow, slightly green-skinned grape varietal that originates from the Bordeaux region of France and can be traced back to the 18th century. The grape most likely gets its name from the French word “sauvage” (wild) and “blanc” (white). It is possibly a descendant from the grape Savagnin, which is still grown in the Jura region in France. Interestingly, while Sauvignon Blanc is a white wine, the crossing with Cabernet Franc created the noble grape Cabernet Sauvignon.

Sauvignon Blanc produces wines that are very forward, crisp, dry, aromatic and extremely distinctive. Classic Sauvignon Blanc aromas range from grass, green bell peppers, nettles, blackcurrant leaf and asparagus to green apples, gooseberries, passion fruit, grapefruit, peach, elderflower and to more esoteric notes such as cat’s pee and flint. The latter is a sign of a wine from Pouilly-Fumé in the Loire Valley where the struck flint smell derives from the presence of high levels of chert in the local limestone soils. This effect is so pronounced and consistent that Sauvignon Blanc was once widely known as Blanc Fumé in this part of the Loire. Robert Mondavi fell in love with Pouilly-Fumé produced by his friend, the Baron de Ladoucette, and when he first made a Sauvignon Blanc at his winery in Napa, he called it Fumé Blanc.

The wine is usually consumed young as it does not particularly benefit from aging due to the development of vegetal aromas such as canned asparagus and peas. Exceptions do exist, though.