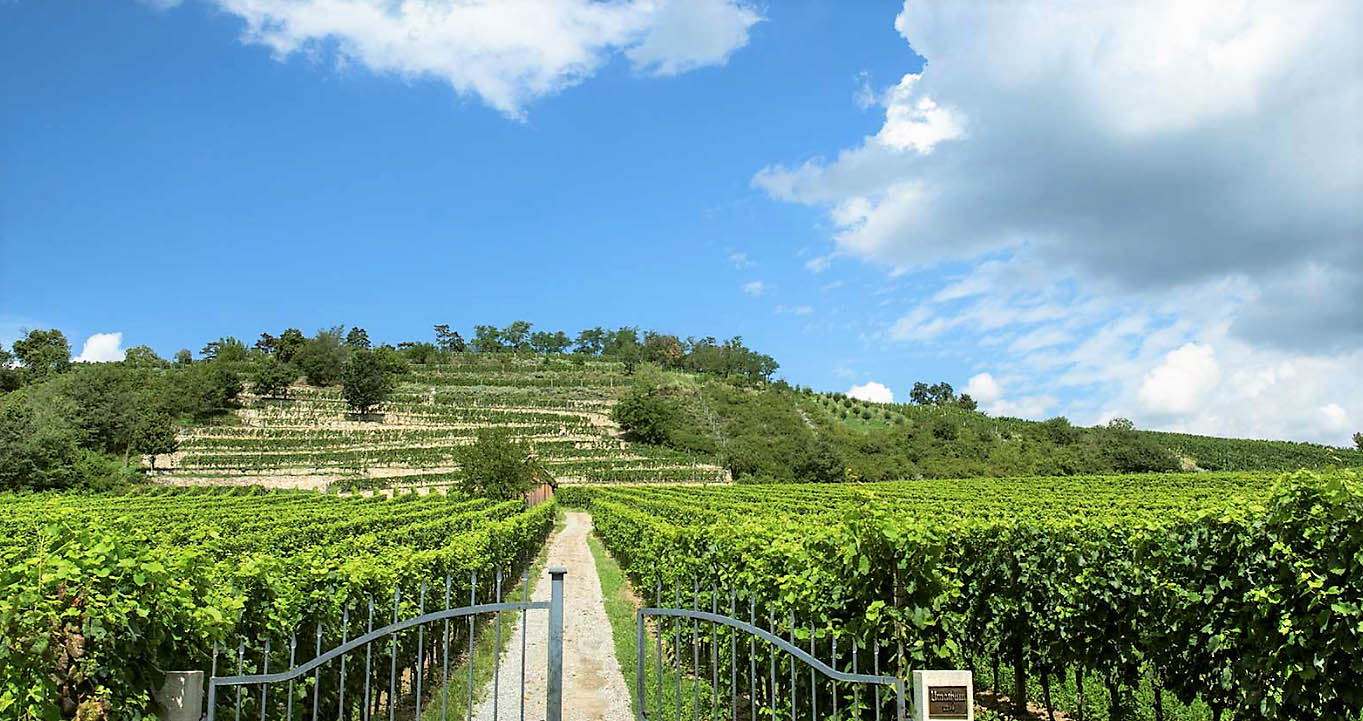 > FACTS
In Burgenland, Austria, the Neusiedlersee Reserve DAC clearly shows that Zweigelt not only produces smooth wines, but also powerful ones. In the end, Zweigelt can therefore take on remarkably different identities. This can be seen in the regional differences that you encounter. Blaufränkisch is popular with connoisseurs, but the planting of Zweigelt is more than twice as large. After the almighty Grüner Veltliner, with 35,000 acres, Zweigelt is Austria’s second grape with 15,000 acres of vineyard. The difference is that Zweigelt is planted everywhere in Austria, and Grüner Veltliner almost exclusively in Niederȍsterreich. This very Austrian cross between Blaufränkisch and St.-Laurent feels practically at home everywhere in Austria, despite differences in climate and surface.

This cross owes its name to its discoverer, Friedrich Zweigelt (1888-1964). He initially worked as a research assistant for viticulture and fruit growing in Klosterneuburg. At the end of the First World War, as head of the institute for the breeding of grape varietals, he became responsible for the selection of grapes and new varietals. He liked to experiment and came up with several interesting crosses. In the end, Zweigelt turned out to be the most successful. He named the grape after his birthplace: Rotburger. In 1975 the grape was renamed Zweigelt or Blauer Zweigelt.

Although Austria is a country of white wines – still two-thirds of the production – the share of red has gradually grown in recent decades. Especially between 1999 and 2015, the planted surface of Zweigelt increased sharply, and then stabilized. For a winegrower, Zweigelt has many advantages. Flowering is easy and usually undisturbed, the grape has good resistance to rot. It is ripe early and is frost-resistant. All this makes it a grape with a high certainty of a good yield. The fact that it can thrive in many wine regions is due to the low demands it requires on the subsoil.

In the course of the ’90s, winemakers also began to discover the possibilities of Zweigelt more and more. At first it was assumed that it would only be able to produce smooth and fruity wines. But with lower yields and wines with more power, wood aging also turned out to work well. As a result, powerful, wood-aged Zweigelt received more and more attention, both in Austria and abroad. Even in barrique, Zweigelt remains a wine with fine acidity and soft tannins.

> WINERY
Joseph Umathum applies organic and biodynamic principles in farming his 150 acres of vines, which are situated on the north and east sides of Lake Neusiedl. The winery is mostly known for its authentic red wines like Zweigelt, St.-Laurent and Blaufränkisch which are available as elegant classic wines as well as characterful single vineyard selections. His “entry-level” Zweigelt (Rotburger) is sourced from gravelly soils and aged in large Austrian oak casks before bottling.

The fermentation is carried out on the skins in order to extract the red color and tannins. To help this process, the juice is repeatedly pumped over the pomace hat. After two weeks, the young wine is separated from the skins, transferred to wooden barrels and the malolactic fermentation is started. The wine matures over two winters without filtration in old oak barrels to achieve stability and maturity.

The wine has a deep ruby color. On the nose, the wine shows very intense cherry, raspberry and strawberry aromas accompanied by spicy vanilla. The palate reveals ripe red fruit, elegant tannins and vibrant acidity. The wine is medium bodied and can be drunk now or can age a few years in the cellar.