Top Form at 40 It was 40 centuries ago that the production of wine took place in what is today Armenia and Iran and, yes, China most probably had been making fermented fruit juices another 40 centuries earlier. At 40 years young, John Jordan and Jordan Winery are following in our ancestors’ footsteps and more recently his Mom and Dad, Sally and Tom Jordan, who gave birth to the winery and their son forty years ago. And what an enterprise it is. It took a fortune made in the oil and gas exploration business to power its development. Tom, a geology engineer, had to keep his hands and feet underground to satisfy his thirst. Today, John is CEO of Jordan Vineyard & Winery, which produces 90,000 cases of Cabernet Sauvignon and Chardonnay annually. Only two bottlings here, made with perfect consistency, from winemaker Rob Davis since inception and coaching from the legendary André Tchelistcheff. In 1990, the production of the J sparkling wines moved to the Russian River area of Sonoma Valley under the direction of Tom’s daughter Judy. There is olive oil (more oil) production and a magnificent culinary program for those who choose to visit the Alexander Valley facility (voir Chateau). The wines have been served the world over, including the White House, with great quantities right here in Southern California. To celebrate the anniversary, the winery decided to throw a party at West Hollywood’s London Hotel on the rooftop. Since it was an unusually cloudy night, stars from the Hollywood set were brought in. John Jordan thanked all of the faithful local patrons for their contribution to the winery’s success over the years and mentioned his long term connection with LA (he is a 1995 graduate of Occidental College in Los Angeles). The results of an art contest depicting Jordan’s presence in Los Angeles were announced,  with the honors going to Agne Jomantaite. Let’s not forget that some library wines going back to 1979 were poured. We could almost hear Randy Newman singing, “I Love LA”. Joyeux anniversaire, John and Jordan Winery! Related Content: More Wine News History of Jordan Winery Uncorking the Past by Patrick McGovern The London West Hollywood You can click on each photo to enlarge. 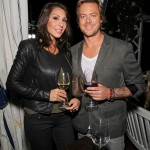 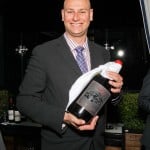 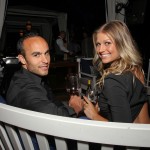 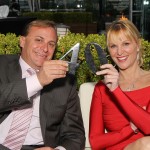 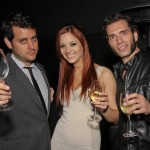 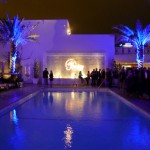 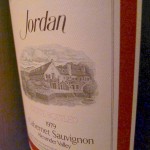 A bottle of Jordan 1979 Cabernet Sauvignon 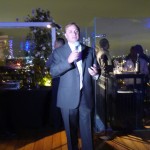