by Alain Gayot Soon, we’ll be able to purchase a flight on Virgin Galactic for a twenty minute trip to space. But for nostalgic flyers who prefer to travel back in time, a WWII era B-17 Flying Fortress is the ticket. For about $400, you’ll be able to sample, for twenty minutes, what brave men experienced as they went on bombing raids over Europe. No first class, no business class, not even premium economy here. These aluminum war machines took ten svelte men in a very noisy, rather uncomfortable environment featuring cat walks, cramped spaces and no facilities. However, thanks to the Experimental Aircraft Association’s devotion to promoting all things aviation past and future, a happy few will be able to board the Aluminum Overcast, a pristine and fully functional aircraft, during its inaugural 2010 national tour. Stopping at an airport near you, enthusiasts can simply take a ground tour ($5) and chat it up with the crew or embark on their very own mission. You’ll also be able to purchase memorabilia and learn about aviation overall. Our flight took place over Oxnard, California, with Chief Pilot George Daubner (also aircraft Commander and Program Director), Co-Pilot Kent Holiday and Crew Chief Meredith Whillock. After a necessary briefing, we all boarded for a loop over the Pacific Ocean and the agricultural areas around the Santa Clarita river valley. As soon as we were airborne, we were able to make our way around the aircraft via the bomb bay, observe the pilots in their busy cockpit, and crawl down to the front gunner’s station which is definitely the premium spot in the aircraft. Everything happened very fast, as passengers each get a chance to sit at the various stations except the aft gunner’s and the bottom gunner’s. As Aluminum Overcast flew in the blue skies at about 180 MPH, we tried to imagine what several hours could have been like with the pressure of a successful mission ahead and the constant threat from enemy fighter aircraft. This was a tough day at the office, very tough in fact, as the loss rate was 40%. There were many casualties, and only 12 of over 12,000 planes manufactured during WWII are still flying today with their four massive 1,200 horsepower engines. Another cool spot in the plane is the Navigator and Bombardier station where you can actually stand up and have your head stick outside. Further aft is the nude fuselage where you can actually see the moving cables that operate the control surfaces; you are warned not to hold on to them as you walk about. Since we don’t want to spoil the surprise entirely, we’ll encourage you to connect with the EAA and book your very own flight. Update: The B-17 Aluminum Overcast is back on tour from October 11, 2013 until November 10, 2013 in select cities. Check out our review of the Experimental Aircraft Association. Read more about the Aluminum Overcast B17 Flying Fortress. For more information, visit the EAA website. You can click on each photo to enlarge. 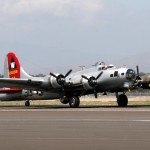 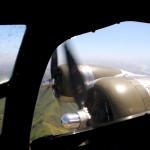 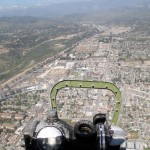 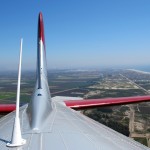 Watch your back just because you can! 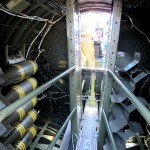 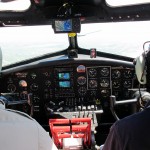 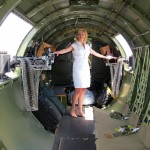 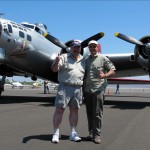 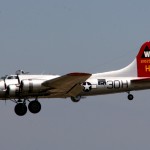